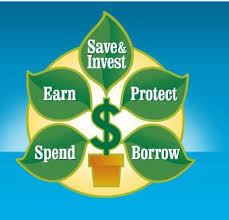 When it comes to “Financial Literacy” I consider myself one of the lucky ones who had a father who insisted that his children learn about how to manage whatever income it was that you made.  My dad was a business man, and in our house growing up, not only were we expected to learn the Three R’s — reading, (w)riting, and (a)rithmatic, but we also received courses in financial literacy from dad.  And, I now believe that those lessons were one of the greatest lessons I received from my father.

I can remember, as about a 12-year old in 1970, that dad told me he would contribute $25 per month to me if I would invest it in the stock market and not take it out until I was 18.  We registered me, with what at that time was called the “Merrill Lynch Sharebuilder Plan” and $25 was sent to Merrill Lynch every month to purchase fractional shares of stock for my account.  This was very rare, as in those days most stocks had to be purchased in “Round Lots” of 100 shares.

In any regard, I remember running my fingers down the small print of the stock market pages of the Minneapolis Tribune and stopping randomly on a stock named “Salant Corporation”.  That was my choice and where my money went.  Turns out Salant Corporation was a clothing manufacturer that made basic clothing that was then branded with fashionable labels.  I not only learned about the stock market, but I learned a little about the clothing industry as well,  and in 1976 I was able to liquidate my profits to use as college spending money.  Suffice it to say, I learned a lot about investment and savings. . . .a trait I’ve used my entire life.

If you have read my columns for any length of time you know that I serve on the Board of Regents for the University of Minnesota.  While I am probably a little bit biased, the University of Minnesota is one of the country’s great land grant universities.  I was somewhat surprised that at my first board meeting about five years ago students had the following request of the board.  Paraphrasing, they commented something like this, “This university does a great job of preparing us to go out and make a living, however, we would appreciate it if you could also teach us to be smarter about spending the money we make.”

In essence, they were asking for more financial literacy training. I thought, “Wow, and these are really smart kids – I wonder what students who aren’t so smart are doing with their money.”  Improving financial literacy  for students has became one of my goals during my tenure as a board member. . . and, I think we are making progress.

So, how does this fit into a death care column?  This article from the New Zealand Herald calls into question the tactics of an insurance company that received twice as much in premiums over the life of a preneed contract than what was paid out in eventual benefits.  The writers seem to concur that the insurance company fleeced the insured.  I don’t have that same opinon.

Caveat Emptor or buyer beware.  Policies are designed for different circumstances.  Consumers need to understand what and why they are purchasing something.  And, there is an obligation of the insurance company, at some level to make sure the consumer is making the right decisions.

$10,000 benefit.  What is not explained in detail, however, is that insured, if they had died in the first month of the policy would have received the $10,000 benefit after only paying $100. . . . .in that case, the financial win/lose situation is turned around.

My point is not to place blame on either the insurance company or the insured.  The point is that we make sure, as we go through life, that we make financial decisions understanding what we are doing.

Funeral homes have a lot of choices to offer in the preneed realm.  And, consumers have a lot of choices of what to purchase in the preneed realm, including simple bank trust funds.  As a funeral home owner/manager make sure that you have preneed plans available that will fit the myriad of circumstances that your consumers might want for coverage. . . . Single Premium, Monthly Premium, Benefit Increasing, etc. . . . the goal is to satisfy the consumer with a policy that will also benefit the funeral home over time.  Make sure that you take the time to find those policies to offer.  That will put the funeral home and the consumer in the best possible circumstance when the time to make the preneed purchase presents itself.