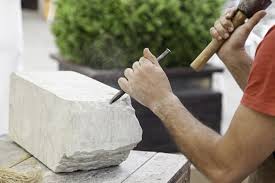 The World Series has been played for the past two weeks and I’m a baseball fan. . . and former little league coach.  I’m “Old School” and don’t particularly like the “data-driven” strategy decisions used in today’s game of baseball.  I like the past when you watched a hitter’s feet move to determine if they could hit a curve-ball rather than “check the charts”.

In Death Care there is old-school also.  This article from Atlas Obscura portrays a wonderful picture and story of those in our society who continue to hand-carve headstones.  As a matter of fact, the article is entitled, “The art of hand-carving Headstones isn’t dead yet.”  The article goes into detail to tell us of the “new generation of artisans keeping the tradition alive in U.S. cemeteries“.

The article tells us of Forest City Cemetery in Portland, Maine, which opened in 1958.  In that cemetery the headstones are sandblasted and laser-etched and the words on every stone are very clear.  The article also tells us that the technology “to produce gravestones en masse by machine was developed in the aftermath of the Civil War”.

Evidently, necessity was the mother of invention in that case in that the United States needed to bury and recognize hundreds of thousands of fallen soldiers.

However, just down the street from the modern Forest City Cemetery in Portland is another cemetery named Eastern Cemetery.  The article tells us that the 4,000 or so interments in that cemetery started in the year 1668, over a hundred years before America’s independence.  The article also says of the monuments, “Intricate designs and mismatched letters, some sharp and bold, others faded nearly to illegibility, tell the stories of the past in beautiful, hand-carved relief”.

Today, according to the article, there are maybe 20 or so shops in the United States that continue to do hand-carving.  Most are in the northeastern part of the country because of that area’s colonial history and ample stone.  And, interestingly, many are of the millennial and GenZ generations — some continuing family traditions, much like the funeral home business.

According to 2nd generation carver Sigrid Coffin, 38 years of age, the work is satisfying.  She says, “While modern, machine-made headstones can also offer a family solace, there’s something special about helping someone in mourning design such a personal and lasting memorial to a loved one and then putting the time and effort into creating it with her own two hands. I feel like I have a connection with them.”

Coffin says that it can take up to 70 hours per headstone to carve.  Her shop, that includes her father working with her, completes up to 20 hand-carved monuments each year which can sell for up to $20,000 apiece.  According to the article, their work spans the continent from California to Prince Edward Island.

22-year old Hope Benson is a carver at the family owned John Stevens Shop in Rhode Island that first opened for business in 1705.  She says of the profession and its future, “as long as there are people who are passionate about lettering and this Old World craft, it will be around.”

More Monument News-–Funeral Director Daily learned earlier this week that funeral industry veteran William A. “Tony” Colson has been named President of Tecstone Granite.  Colson has spent more than three decades in funeral service.  Many of you will remember him as a sales director at Batesville Casket and later as President and CEO at both Wilbert Funeral Services and Genesis Casket.  His latest endeavor has been as President and CEO of Segue Memorial Group Holdings.

Here is the website for Tecstone Granite, a national wholesaler of granite and a one-stop solution for markers and mausoleums.

An interesting comparison with today’s feature article.  Here is a photo and explanation of Laser Etching from the Tecstone Granite website.  Compare this to the hammer and chisel method available by today’s (and yesterday’s) monument artisans as mentioned in our feature article.