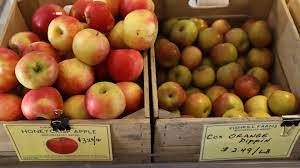 My wife, Angie, came home from the grocery store on Monday morning and showed me a bag of Honeycrisp apples that priced out at over $18. . . Now, I don’t buy the groceries, but I could tell from her reaction that this was a high price for these apples.  So, I think we know that inflation is here.

My thought process today is, “How will that affect those of us in the death care business?”

I also read an article from The Hustle today that was headlined, “Inflation just reached a 30-year high, and might be even higher thanks to Skimpflation”.  It’s the first time that I’ve ever heard of “Skimpflation” but the article pointed out that in service businesses, “Skimpflation” is a real item.

So, what is “Skimpflation” and how might that affect us in the death care business?  “Skimplflation” is more related to a service business like funeral homes and can be defined as potentially charging the same price, but skimping on the service.  Maybe a package price for a full funeral calls for an evening visitation and you historically allow four hours for that.  Skimpflation would be charging the same, but reducing the visitations to, say, two hours so you can save on labor costs.

My guess is that if you have not noticed it already, you will see some “Classic Inflation” hit your business soon.  It’s already here in gasoline costs and will be here soon in winter heating costs.  In many areas of North America it has also came in the form of wholesale merchandise costs and most funeral directors have already seen that.

Funeral home owners and operators need to plan on how they deal with these increases to both raise revenue to cover margins and at the same time keep costs low enough to not get negative perceptions about increased pricing with their brands.  To do so, looking at “Skimpflation” may be one way to help.

Maybe the standard service package could shrink the visitation to two hours from four to save labor expenses or maybe instead of sending a group of three personnel to all services you could get by with only sending two people to lower the labor expense.  Or maybe closing the business office at 3 pm instead of 5 pm or not having it open on Saturday.  Those are a couple of easy thoughts that could save money without the perception that your prices are going up.

Angie and I like Honeycrisp apples.  . she had the option to buy less expensive apples today and your funeral home consumers who are not 100% sold on casketed burials have the option to purchase lower priced items.  . . . such as direct cremation.  One of your thoughts in combating pricing during inflationary times should be the thought that you don’t want your pricing actions to lead to lesser products being chosen by the consumer as their solution.  Keep that in mind as you make your plans.

Story Related —  Put this in the more than you needed to know category, but the Honeycrisp apple is preferred by me, not only for its taste, but because it is a University of Minnesota genetic invention.  People don’t think about this type of thing very often, but major research universities generally are known for something.  For some it is football. . . for some it is the hospital . . . .

As a matter of fact, the University of Minnesota’s only Nobel Peace Prize winner is Norman Borlaug and he won the coveted prize for agricultural work.  Borlaug is sometimes called the “Father of the Green Revolution” and won the Nobel in 1970 for his work in developing high-yield, disease-resistant wheat which could be grown in many previous non-growable areas of the world.  Borlaug is credited with saving over a billion people around the world from starvation through his genetic improvement of wheat.