A release from the Associated Press announced that the community of Farmersville, Texas, some 35 miles northeast of Dallas and a community of 3500 residents is square in the cross-hairs of America’s issue with the Muslim religion. On Monday night a group led by Shamsur Rahman moved a step closer to getting permission from the town council to establish a cemetery in Farmersville so that local Muslims have a local cemetery. The Islamic Association of Collin County wants to develop […]

Federal officials have awarded the designation of National Historical Landmark to the Wyandotte National Burial Ground in downtown Kansas City, Kansas. An estimated number up to about 600 of the Wyandotte Native Americans are buried there. Graves date back to 1843. Among the number buried there are Eliza Burton Conley, who in 1910 became the first native American to argue in front of the Supreme Court of the United States. At that time, developers were trying to buy the land […]

The Pennsylvania Board of Funeral Directors has levied a fine on a state funeral establishment which has been operating a foul of state regulations for over six years. According to an article in the Delaware County Daily Times, the Catherine B. Laws Funeral Home in Chester has been without a funeral establishment license and without an up to date funeral director under license since 2010. The funeral home has contended, that while they continue to operate, they could not afford […] 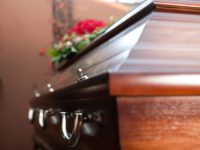 “I think it would be great to eliminate this tax.  For people, at the end of life, to have further tax put upon them seems to be too much for people who already spend their whole life being taxed”  Funeral Director John Kohl of Parker Kohl funeral home as quoted in Southernminn.com Southernminn.com reports that Minnesota governor Mark Dayton has proposed removing the state sales tax on viewing caskets and cremations urns.  Burial caskets aren’t taxed but rental caskets for […]

Who must comply with the FCC Funeral rule