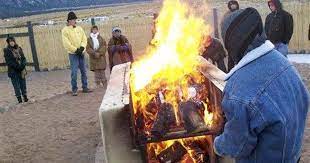 You can read in this article and video report that the State of Maine legislature has before its Health and Human Services Committee a bill that would allow non-profit entities to carry out open-air cremations and then scatter the remains on the property owned by the non-profit.

The bill would require the non-profit to own at least 20 acres of property and one group pushing the idea is a non-profit organization called Good Ground Great Beyond who currently own a 63-acre parcel of property in Dresden, Maine.

According to the article, a funeral pyre would have a body on it and then it would be cremated on a bed of timber.  The same article notes that it is legal only in Colorado at this time – and another article notes that only one of the two Colorado sites is open to the public.

This article from the Lewiston Sun Journal reported that the state of Maine leads the nation in percentage of people who choose cremation, indicating that that number is about 75%.

Good Ground Great Beyond’s founder, as reported in the Lewiston article is interfaith hospice minister Angela Lutzenberger.  According to that article, here is some of her reasons for being involved in this endeavor, “. . . .she saw that people too often became disempowered after a death, turning over the details to a funeral director rather than staying engaged together.. . .she would “dearly love to have access” to open-air cremation when her time comes, calling it a natural way to bring together earth and sky, the seen and the unseen. There are a lot of people, she said, “who would just like to have options.”

A public hearing on the bill has yet to be scheduled.

Funeral Director Daily take:  From my point of view, I find outdoor open-air cremations on private property a form of disposition that would not be extremely popular.  However, I will remind you that I am not always right in my long-term thinking.  I also see the legality of such as a struggle between individual rights and public safety which is a contentious friction in many aspects in America right now.

Open air cremations would have none of this technology and you would expect, offer more damage to the environment than modern funeral home operated crematories.  Because of that, at this time where the green movement has taken hold in Congress, I find success of this idea as a long-shot if it indeed less friendly to the earth than funeral home cremation.

If you follow the death care industry like I do, you will note that two years ago in the state of Missouri, the legislature actually passed a bill like this.  However, Governor Mike Parson vetoed the bill with this message, “The burial of our loved ones or the disposal of their remains is deeply personal and should be treated with the utmost care and respect. Without more thorough vetting to ensure that outdoor cremations can be conducted in a manner that fully disposes of the entire remains while also addressing the health and safety concerns of individuals who may be impacted nearby, I am not comfortable with allowing these types of ceremonies to be conducted in our state.”

To my knowledge, at least to this day, the bill has not been resurrected in Missouri.  Here is an article on Gov. Parson’s veto.

Editor’s Note-– File this article under the “What goes around, comes around” legacy.  While researching today’s article we came across this article entitled, “Gond community to drop ancient cremation ritual to save trees”.  Here’s the first paragraph. . . . “For the Gond community, one of India’s largest indigenous people, cremation is a part of the final rites when someone dies – the dead body is put atop a pile of wood and burnt to ash. But realising that they were faced with a choice between holding on to an ancient ritual and protecting their environment, which they consider sacred, the Gond people of Chhattisgarh have decided to bury their dead instead of cremating them, to save trees.”