An article written in Australia’s The Guardian points out that after a six month test the Salvation Army will be entering the funeral business on that continent.  Salvo (short for Salvation) says that after doing about 90 services in their six month trial they will be starting up and operating in the New South Wales territory and eventually expand to Brisbane in 2018. According to Salvo’s Chief Executive, Malcolm Pittendrigh, this will be a “natural extension” of the Salvation Army’s […]

According to CBS article a recent survey by the Funeral Consumer Alliance and Consumer Federation of America shows that funeral and cremation pricing at establishments owned by funeral giant Service Corporation International are, in general, higher than independently owned funeral establishments. It seems to us at Funeral Director Daily that we seem to see news of this situation almost monthly.  CBS also notes that the price differences are not easy to spot because of the way funeral prices are disclosed. […]

Today we introduce the Funeral Director Daily “Death Care Index”  or DCI of the public equity markets.  The DCI will consist of six publicly traded companies that deal in the funeral, cremation, cemetery, and pre-need industries and are publicly traded.  The companies, which we will describe below, include Matthews International, Service Corporation International, Carriage Services, Hillenbrand Industries, Assurant, and Stonmor.  As of the close of the markets on Friday, March 3, 2017, if you owned one share of each the […]

Alcohol and the Celebration — A Trend that is Here

A recent article by NBC News Business has highlighted the seemingly rapid trend in the funeral/cremation business. That trend, becoming somewhat popular among the baby boomer generation, is celebrating the life of the deceased with alcohol at the wake/visitation or post funeral. Funeral firms are searching for just the right way to offer this type of service while still being relative to the grief needs of the family. The NBC News article touched on three different ways that existing funeral […]

There is no doubt that funeral service has changed. There is also no doubt that funeral home owners care about the people they serve. In search of all possible therapies for people in grief and need, the Greenlawn Funeral Home of Springfield, Missouri, has added a comfort dog to its staff. In an article from the Springfield News-Leader it is noted that the dog, Gracie, began in December. She is a goldendoodle acquired especially for this cause. According to staffer […]

News OK has a nice article on Matthews Funeral Home in Edmond, Oklahoma.  The firm is owned by Randy and Barbara Matthews.  Their sons Kyle and Kris Matthews are also involved in the business.  The company was started in 2000.  Matthews states that cremations now account for 45% of his cases. 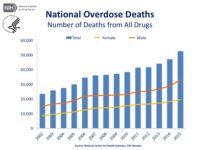 SFgate has an article on the impact of rising opioid overdoth deaths on the funeral business.  Opioid overdoses have been rising especially for people ages 25 and up.  This chart says it all.  The number of overdose deaths is rising rapidly due to heroin overdoses and illicit opioids

It is no secret that the American political system has pitted all kinds of people against each other. Repubicans vs. Democrats, Black vs. White, Men vs. Women, Lutherans vs. Catholics, and Muslims vs. Jewish. While we believe that this is a sad state of affairs, sometimes in the worst of events, the best of the human spirit emerges. As a small town funeral director I’ve been involved in the clean up of mischievous cemetery vandalism more than once. All the […] 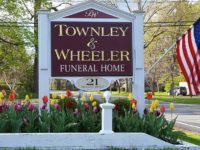 Your Clifton Park & Halfmoon has done a nice feature about Kathleen Lowes Sanvidge, the owner of Townley and Wheeler funeral home in Ballston Lake, New York.  Sandvidge has been certified as a Women Business Enterprise in New York.  Her firm is the only certified women-owned funeral home in New York State. Funeral Director’s take: Interesting to see that Lowes Sanvidge uses mainly Facebook to stay in touch with clients and meet clients.  A social media strategy is critical if you […]