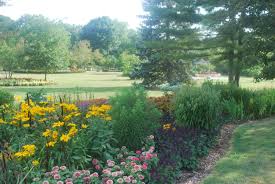 The city of Amherst, New York, is proposing to build a “first of its kind’ memory garden in that community.  The cemetery, if built, proposes to be a cremation only cemetery with walking paths and gardens and would not allow standard headstones as seen in most cemeteries.  The idea has been proposed by the city to solve a unique issue involving the city owned Audubon Golf Course.

It turns out, as you can read in this article, that the city owned golf course was built over what is now known to be graves or remains of graves that have been moved to that location over time.  According to the article, records show that the Erie County almshouse, or poorhouse, operated in the community.  Records also show that 11,000 people died over the years at the almshouse and thousands of those bodies were never claimed.

Over time, and because of new construction at differing times, it is believed that many of those remains have been removed and re-buried on what is now the Audubon Golf Course.  Joseph P. Dispenza, President of Forest Lawn Cemetery, is quoted “This wasn’t done with malice, but it reflects the mores of the past.”

Amherst City Supervisor Brian J. Kulpa stated, “This is what it is.  This is what we have.  Now, what do we do, and how do we do it in the right way? . . . .The town had run a golf course through a cemetery unknowingly.”

It appears that the community has came up with a concept that would leave the remains undisturbed while transforming that entire section of the golf course into a modern, park-like cemetery.  The golf course would be closed but the town is also considering “turning an adjoining section of the golf course – centered on the current Audubon clubhouse, parking lot and driving range – into a three hole mini course surrounding a high-tech driving range.  Supervisor Kulpa mentioned that if the cemetery garden is built, Audubon would no longer function as an 18-hole course.

Nothing has been finalized yet nor have officials figured out the project cost or how the transformation will be paid for.  It is expected, however, that the golf course will only be open for one more season.

Funeral Director Daily take:  This is a difficult situation and a situation where there is probably no easy answers.  It is unfortunate and a situation one would have wished not to have happened.  However, once discovered, you have to give the townspeople credit for dealing with it and recognizing the sanctity of human life.