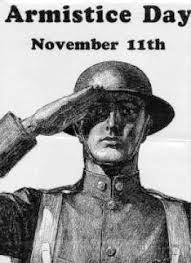 November 11th brings back memories in many countries.  It’s not just Veteran’s Day in America. . . it is a day of remembrance all over Europe.  Originally referred to as Armistice Day (Armistice, in Latin, means to “stand arms”).  It was at 11 am on November 11 (11/11) in 1918 that an agreement was reached to end the fighting in World War 1 as a prelude to a treaty (The Treaty of Versailles 1919) being signed.

So, it has become known that at the 11th Hour on the 11th Day of the 11th Month we should not only remember that peace, but dream of it for the future.

And while 1918 is 104 years ago, it doesn’t seem that far removed for me.  When I started in funeral service in 1980 many members of the local funeral honor guard were World War I veterans. . . .they would have been about 80 years old at the time and I heard many stories from them of spending their late teen-age years in Europe fighting the “Great War”.

I’ve often thought how fortunate that I got to know so many of those guys. . . .but it really wasn’t what they said to me, but how they carried themselves that I remember.  They were gentle old warriors -who knew and had experienced the ugly side of war when I got to know them. . . and they were humble, and kind, and compassionate. . . .They turned out to honor their comrades in a quiet way. . a way in which you could just see their respect. . . and I sensed that they believed it was not only their duty, but that duty needed to be performed with a sense of reverence and respect that they had for the soldiers who fought beside them.. . . and, quite frankly, it was their honor to give this respect.

As Americans. . . we should be grateful and fortunate that those soldiers protected our liberties on a far and distant land. . . May God Bless their memory.

Related — View today’s  National Veterans Day Observance, honoring the men and women who have served and continue to serve in the U.S. armed forces during war and peacetime, which will take place on Friday, November 11 at Arlington National Cemetery (ANC). Beginning at 11 a.m., the observance will also be live-streamed.  You can find more information here.

Finally — Our small community raised over a $1 million in private donations to build a Veteran’s Memorial on our main street two years ago.  Take a minute and watch the sun rise over that memorial while those soldiers and America itself are honored.. . . .and then, take a minute and dream of peace across the planet.