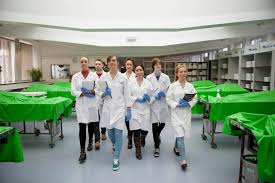 We’ve all talked about it and see it out in the profession — a lack of trained and licensed funeral directors to combat the coming years when America faces a wave of Baby Boomer deaths.  Without the influx of new professionals, many funeral homes will be understaffed which can lead to a vicious cycle of people leaving the profession for a variety of reasons, which in turn, causes less professionals available to do the death care work. . . . Lots of things are being tried to get people into the profession. . .

According to this article from Seven Days Vermont, maybe that state will lead the way forward with innovative educational and internship possibilities.  The article states:

“As Vermont’s 62 funeral parlors confront chronic staff shortages, shrinking profit margins and an aging workforce, they have responded by recruiting a new, more diverse generation of workers. The image of the mortician as a dour older man in a dark suit who took over the family funeral parlor from his father no longer applies. Today, it’s increasingly likely that a funeral director will be a young, college-educated woman with no previous family involvement in the business.”

In Vermont the influx of young people into the profession has been made possible by a new and more affordable path to licensure.  Recently the Community College of Vermont has offered a certificate program that “combines college-level coursework with hands-on training. At a cost of about $8,600, students can complete the program in two semesters, while simultaneously fulfilling their apprenticeship requirements as paid employees in local funeral homes.”

According to Chris Palermo, former President of the Vermont Funeral Directors Association, “(prior to that offering) anyone who wanted to become a licensed funeral director or embalmer had to leave the state, because no Vermont colleges offered a traditional degree in mortuary science. Typically, that meant attending a two- or four-year college, which can cost $30,000 or more per year.”

Palermo continued, “It essentially allows us to home-grow our own workforce“.

Since the program started in 2019, 16 participants have completed the program and now, in a post-covid society, 38 students are currently enrolled.  Of the 38, three -fourths of them are women.

Adam Goss, current President of the Vermont Funeral Directors Association is quoted in the article as “welcoming new faces into the profession”.  He does say, however, “that the state’s funeral industry must find ways to make the profession more attractive, such as by accommodating parental schedules and providing a healthy work-life balance. Gone are the days when morticians lived in the funeral home and answered the phone at any time of day or night.. . . We still have to provide coverage around the clock every day of the year. It’s by far our biggest burden. But in order to get good people, you can’t ask them to give half their life to being on call.”

Funeral Director Daily take:  We all need to do our part in making sure that professional funeral directors continue to be available for the families that need them.  If we believe in what we do it is imperative that we train the next generation of caregivers in our profession.  I commend the State of Vermont funeral directors for finding a way to help the situation.

It’s very interesting to me the high percentage of young females entering the occupation.  Anecdotally, in my career as a funeral director in my home community, I mentored four young people who eventually became funeral directors — they were all female.