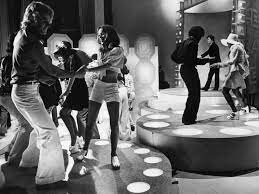 On February 7, 1964, the British pop rock group the Beatles touched down on the tarmac of John F. Kennedy Airport in New York City and were crowded by thousands of fans.  Two days later they were introduced to America with an appearance on the Ed Sullivan Show.  A typical fan at that time was an 18-year old who would have been born circa 1946.

That fan born in 1946 would be approximately 75 years old in 2021.  And, bearing on the life expectancy of Americans, would fit right in the sweet spot of a memorialization product from a company called Vinyly.  That product, whose website you can access here, is a vinyl record with cremated remains pressed into the grooves of the record.

According to this article on the product, “the remains must be sprinkled onto the raw piece of vinyl before it is pressed by the plates.  This means that when the plates exert their pressure on the vinyl in order to create the grooves, the ashes are pressed into the record.”

Again, according to that article, ““the content of the 7 or 12 inch (record) can range from the standard greatest hits, specially-composed tracks, audio of the deceased person’s voice, or even just plain silence so families can hear their loved ones crackle!”

It is just another product that is available in the world of post death memorialization.  We’ve heard of memorialization methods where ashes have been sprinkled into paint that is used for a portrait, or ashes put into cremation ink (here’s an article FDD did on that process), and we know of a new procedure from the company Parting Stone that has been brought to market that uses cremains and turns them into stone-like momentos.

it is obvious that death care, remembrance, memorialization, and grief is much more complex to many people than simply a decision of earth burial versus cremation.  There is now alkaline hydrolysis, fireless cremation, green burials, and recomposition in the market place.  There is also memorialization in places like Better Place Forests and coral reefs . . . as well as the idea of being put in a small vial and lifted into space by Celestis Memorial Spaceflights.

I publish today’s article simply with the reminder that we are here to “Serve”.  There are many options available to the death care consumer and we are all better if we know what is out there to offer them.  The more we know. . . .the better service we can deliver.