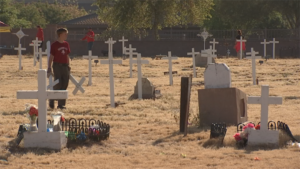 It was recently reported on the web-site AZFamily.com that a teenager from Chandler, Arizona, found out that his good deed and Eagle Scout project was “Life-Changing” to him.  Adrian Dozal, 16, used a personal connection to an Arizona cemetery to create a project to bring the cemetery back from disrepair and in the process learned something abut himself.

Dozal noticed last fall that the Goodyear-Ocotillo Cemetery was overgrown and crosses on the graves were rusting.  He researched the cemetery and found out that it was the final resting place for more than 100 immigrant cotton field workers who came to to help the American World War I effort.

Dozal felt connected to what he learned because he comes from an immigrant family – his father is from Mexico.  He then planned the project and raised money for the clean up as well as enlisted his scout troop colleagues to accomplish the work.

“This project made me realize I can change something and other people can too.  To make the world a better place, that’s what I’m here for,” said Dozal.

Funeral Director Daily take:  It is always great to see one of America’s young people realize the self-satisfaction that can come from putting “Service above Self”.  Projects like this help our young people realize that there is a “Greater Good” to our country.  We, as a society, just need to point these young people in the right direction and they will then find their compass.

After 35 years in the funeral business – where I felt I put “Service above Self” I am now being inspired by the young people I see everyday in high school and on college campuses.  Can you think of some way in which your funeral business can inspire our nation’s young people to go into action in your community to make it a better place?  My guess is that, given the chance and opportunity, these young people will go above and beyond any result that you were thinking about.  In the meantime, you may give them a life-changing opportunity.