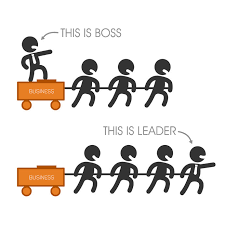 Ray Dalio is the founder and co-chief investment officer of Bridgewater, the largest hedge fund in the world. He’s one of the 100 richest people on Earth.  Here’s what he says of leaders:  “Most people at the top of their profession made it there because they must be very smart and very capable. Of course, that enters into it. But it’s really how they deal with what they don’t know.”

I read a couple of articles that dealt with leadership last weekend and it reminded me of how I evolved into, what I believe, was a capable and well working management style.  As you may know about me — I was thrust into the funeral home business at age 19 because of the untimely death of my father.  I came into the business as the lowest paid member of the staff but within a few months was asked to lead a group of much more mature funeral directors and other staff members.  Looking back on that experience, I made a lot of mistakes – luckily none were fatal for the organization — but I also developed my own blend of management skills that worked very well for me.

I think what really helped me is that I studied a lot of things such as financial management and really listened and learned from the sales professionals that stopped by the funeral home from time to time.  I didn’t really see those people as “Salespeople” but as partners who wanted to help me make my business grow. . .and in doing so be able to buy more products from them.

Over time, I also really listened to my staff members and became much more collaborative with them than controlling.  It seemed to work out that the more I asked them how we should do things – and gave them more leeway to do it as they best thought — the funeral home got better, more profitable, and the staff members were happier.

I remember several specific times where staff members had better ideas and knowledge than I had on a subject and how it really worked out to our business’ best interests and profits.  Here’s a couple of them.

The first was in the early 1990’s and one of our funeral directors suggested to me that we should greatly increase our professional services charges and greatly reduce our casket and vault sales prices.  His theory was that we could give much better service if we didn’t appear to be “selling” caskets and vaults in the selection room.  He also believed that our “profits” should come from the services we conduct and not the “products” we sell ancillary to those services.  After much study — including going over every single sales contract of the preceding 12 months — we switched our pricing dramatically.  From an $1800 service charge and caskets sold at 2.4 times wholesale cost we moved to a $3800 service charge and caskets sold at wholesale cost format.  It took some courage, but at the end of the day our profitability not only was predictable based on the number of services we did, but it was greater than ever.  Families never complained about the cost of caskets in the selection room again and if we felt a family was reaching its price pressure point we could suggest lower priced caskets with no repercussion to our bottom line.

Another time, another staff member suggested that we move from using a commercial printer to print memorial folders, as a cash advance item, to taking them “in-house” by purchasing a scanner and colored two-sided printers.  This doesn’t sound like much today but moving from printing stocked folders to doing them “in-house” in the early 1990’s was a big switch.

The staff member convinced me that he could work up a “format template” on our computers and we would be able to offer color photos in memory of the deceased on the folders.  He also convinced me that families would be willing to pay about $250 for this elective service and we would have about a $230 margin when ink and paper costs were calculated. . . . He was right — we had “made to specific order” memorial folders for families who were happy to pay that charge to have a “personal” touch to the services at a time when “personalized” was just coming into vogue.  And, when you figure that we did about 300 calls and not only made families happier, but gained an additional $230 margin per service — which put an additional $69,000 of annual margin into our operation – it turned out to be a great decision.

In both of those instances I didn’t know or hadn’t even thought of the profit potential available to the funeral home from the changes.  It goes to show that a “collaborative” relationship with team employees is essential for leadership to thrive.  One of the articles that I read last weekend was this article by Andy Serwer of Yahoo Finance where he challenged the leadership of General Electric’s Jack Welch — named Fortune Magazine’s “Manager of the Century in 1999”.  Serwer contends that his management style during the last 20 years of the 20th Century would not work so well today.

Here’s what Bill George, Senior Fellow at the Harvard Business School and former CEO of Medtronic said of Welch’s leadership, “Welch was all about “power-driven, top-down leadership, command and control.  You can’t lead that way today.”

The article concludes about Welch’s leadership style and leadership style needed today by saying this, “George is talking about ‘shareholder’ capitalism, of which Welch was the ultimate champion. Today ‘stakeholder’ capitalism holds sway. George speaks about how Microsoft’s Satya Nadella represents this new paradigm. Nadella is a “learn-it-all” kind of guy instead of a “know-it-all.”

Dalio says in this article from The Hustle that he has analyzed traits of leaders.  Here’s a couple of items he says people like Elon Musk and Bill Gates have in common.

So. . .what is your management style?  Is it controlling or collaborative?  Will it work in today’s environment or do you need to tweak it a little bit?

Enter your e-mail below to join the 2,751 others who receive Funeral Director Daily articles daily: