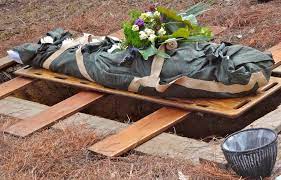 Every day when I search for articles that relate to our profession I see multiple articles that deal with “Green Burial”.  And, if you follow trends, you will know that the rule is that before trends are adopted in common use, they grow in media articles as people are learning about them.

So, I see a lot of articles about “Green Burial”, but I have yet to see, at least in my area, an uptick in the practice.  Back in the 19th Century Mark Twain quoted Charles Dudley Warner who quipped about human observation, “Everybody talks about the weather, but nobody does anything about it”.

My question is, have “Green Burials” went the way of the Warner quote or are they a growing trend across North America?  In this article from the Episcopal News Service titled “Episcopalians explore, embrace green burial as a final act to care for creation“, the author states that “approximately 5% of all burials in the U.S. are “green”, meaning without preserving chemicals or cement vaults, and instead place bodies directly into the earth in biodegradable caskets or shrouds.”

I’m in no position to know if that is correct or not, but the article also states that there are approximately three million deaths in the United States each year which would equate that 5% number to about 150,000 “green burials” annually.  Quite frankly, at least at this point in time, from my point of reference I just don’t see that amount.

The article also talks about Tennessee’s conservation cemetery, Larkspur.  Here’s a quote from the article about Larkspur, “At Larkspur’s 112 acres, families and friends hike into a nature preserve to bury their loved ones without durable caskets or cement vaults; the experience is meant to create deeply personal spiritual rituals, while also seeking to preserve land and reduce carbon emissions.”

Larkspur is mentioned as one of 12 “certified” conservation cemeteries in the country.  Yet, the article also mentions that Larkspur has only done “more than 100” burials since its 2018 opening.

I’m not against “Green Burials”.  Matter of fact, I’m all for them as I believe that the more options the consumer public has the better off they are and can make the choice that fits them right.  However, at least from what I see, I get the impression that many people think that this type of disposition is a great alternative, but then don’t follow up on the act of doing so.

It could be that it is a younger demographic that is advocating for “Green Burials” and in time we will get there with the numbers of actual cases.  Or, it could be, like many other revolutionary products, infrastructure needs to be built to support the product before it can really be practiced.  In that vein, it may be a lot like the idea of turning America’s transportation mode over to electric vehicles over gasoline engine vehicles.

Think about it.  The infrastructure needs to be done.  I recently drove from Florida back to my home in Minnesota — 1,967 miles.  It took me about 80 gallons of gasoline filled into the 12-gallon capacity of my Ford Escape.  That required seven different stops at gasoline stations along the way.  Each stop took less than 10 minutes and I was on my way.

I could not have done that with a Tesla electric vehicle because the infrastructure for changing batteries in a timely fashion is not in place – yet.  I understand Tesla’s get about 300 miles to the charge which would have required the same seven stops.  I don’t own a Tesla and cannot vouch for the time.  However, without what they call “Superchargers” and some other options, here is the answer I got from Google on charging a Tesla from Zero battery power to full battery power:

“Depending on which model and version of Tesla you own, it can take between nine and 22 hours to fully charge your empty car battery.”

My point being is not about Tesla, but I wonder if there is demand for “Green Burials” but our profession just does not have the infrastructure – including funeral homes interested in doing these type of services – to support wide-spread use yet.

The linked Episcopalian article also talks about the book, “Our Last Best Act“.  It is authored by Mallory McDuff who has investigated body farming, aquamation, body composting, and green burial.  I think she hits it pretty accurately with this quote, “Things can shift around death and dying.  But it takes awareness, it takes people acting on awareness, it takes conversation.”   I would go even further and say that it will take infrastructure which I believe includes cemeteries, funeral homes willing to carry on these services, and ancillary workers like people to dig the graves by hand.

I do believe also, much like Green Burial Council President Edward Bixby when he states, “There’s not a family or a person that’s ever attended one of these services that wasn’t moved in a way that changed their entire thought process”.  And if that statement is true, then there will be a growing movement with “Green Burials” eventually.

Vermont passes Natural Organic Reduction Law — The following is an excerpt from a letter from Vermont Representative Tom Stevens to his constituents.  You can read the entire letter here.  Only a portion pertains to death care and we quote that here:  “We passed a bill that would enable “natural organic reduction” to be a legal form of final disposition of human remains. The advocates for both funeral directors and cemetery associations testified in favor of the bill. Essentially, a body is composted and added to filler and can produce up to a cubic yard of compost. In states where this process has recently been embarked upon, the compost is no longer considered “human” after processing (it is heated and disinfected) and is usually donated to conservation sites, with some compost reserved for the family, if it so wishes.

There are currently no facilities to do this in the state, but this enabling legislation would allow a facility to be built for this purpose. Reasons for supporting this from the cemetery and funeral director’s association include an impending lack of space for cemeteries and, as seen during the pandemic, a numerical switch in preferences from conventional funerals to cremation, and cremation itself requires a lot of carbon based fuel. We expect natural organic reduction to become another option for Vermonters who wish to not leave a large footprint on the earth after they die.”

Enter your e-mail below to join the 2,628 others who receive Funeral Director Daily articles daily: