So, I warned you earlier in the week that I would be doing a column on what was happening with Starbucks and why I thought there was enough general information in what I had heard that it would be useful to people who operate businesses in the death care realm.

To refresh you, I had told you that last Friday I had heard Starbucks CEO Kevin Johnson be interviewed by CNBC’s Jim Cramer on his morning show.  Johnson went through some of the issues Starbucks had encountered at the beginning of the pandemic, how they analyzed what was going on, and became determined to be a better company once the pandemic was in the rear view mirror than they were before it occurred.

The company has learned a lot, including what they believe may be new human behaviors going forward, and has now rebounded and are ready to have operating stores bent on catering to these new behaviors.  My thought process was. . .funeral homes should be doing the same analyzing and preparing.

Here’s some things that happened to Starbuck’s between the start of the pandemic and now:

To get to this point Starbucks has used technology by offering “Remote order and then Pick-up”.  They have made sure that orders are ready and they have figured out ways to get the drive-thru areas moving faster.

As for urban stores which are still underperforming because of lack of people in those areas, they believe post-pandemic that many customers may still have an aversion to “enjoying their order” inside the store.  Johnson pointed out that they believe clients will be more likely to “Grab and Go” and enjoy the order outdoors or back in the safety of their office.  To that end, Starbucks urban stores will be reconfigured to cater to this “Grab and Go” client.

Service Corporation International CEO Tom Ryan mentioned in his Earnings Call the other day that “services” pre-pandemic were held with 63% of deaths and that dropped to 40% but is now back to about 58% as SCI funeral homes have figured out how to meet the customer on that topic.  And, anecdotally, a funeral director told me the other day that he had never made a “remote” arrangement prior to the pandemic.  Now, however, it is very common place and I found it interesting when he told me that the first time he sees the family in many instances, is when they come in for the visitation.

So, there is no doubt in my mind, that technology and remote arrangements will be one consumer habit that changes.  Is your funeral home ready for that?  Consider the death in your community where the next of kin is 500 miles away. . . . in my day we always waited for the next of kin to get to the funeral home for arrangements.  I don’t think that will be an ordinary occurrence anymore.  Are you set up for signatures and financial documents to come through in a remote way?

With consumer behavior, are you set up for pre-arrangements and possible price shopping from remote locations for you clientele.  Here is an interesting table  that illustrates how “technology” has accelerated ahead at an incredible fast pace because of the pandemic.  Are you ready for this?

And, in an even bigger train of thought, what have you planned about using the historical low interest rates in to your advantage?  Do you have remodeling to do. . . do you want to acquire another location. . . .do you want to put in a crematory?  The following chart shows the historical low interest rates right now, and in my opinion, because the federal government has borrowed so heavily for stimulus packages, I believe the rates have to stay low for a period of time.  Again, in my opinion, this is why the public death care companies are refinancing their debt at this time.  As a matter of fact, Carriage Services CEO Mel Payne mentioned in his latest Earnings Call that he would not be against paying a $20 million pre-payment penalty on some debt to get better rates. . . in that case it is all about the math.  As an individual operator, you may have the same ability with your local bank or banks.  Look for the leverage.

One final note, I’m optimistic and  it is my opinion that we will get back to “normal” sooner rather than later when it comes to recovering as an economic society following the pandemic.  However, I do believe, like Starbuck’s Kevin Johnson, that there are consumer behaviors that will probably change — will the cleanliness of your funeral home make a bigger difference?   As in that question, I don’t really know what the behaviors that change will be. . . but there is bound to be some and you are better if you know that and are ready for that.

On that final note I share this final graph with you.  This graph attempts to point out, and I think it does a good job, that the pandemic and its economic toll on our country and many of our own businesses can be compared with a “natural disaster” rather than a structural problem with our economy, such as we had in the 2008-2011 real estate and banking meltdown.  The graph seems to show our recovery more in sync with Hurricane Katrina than with that meltdown. 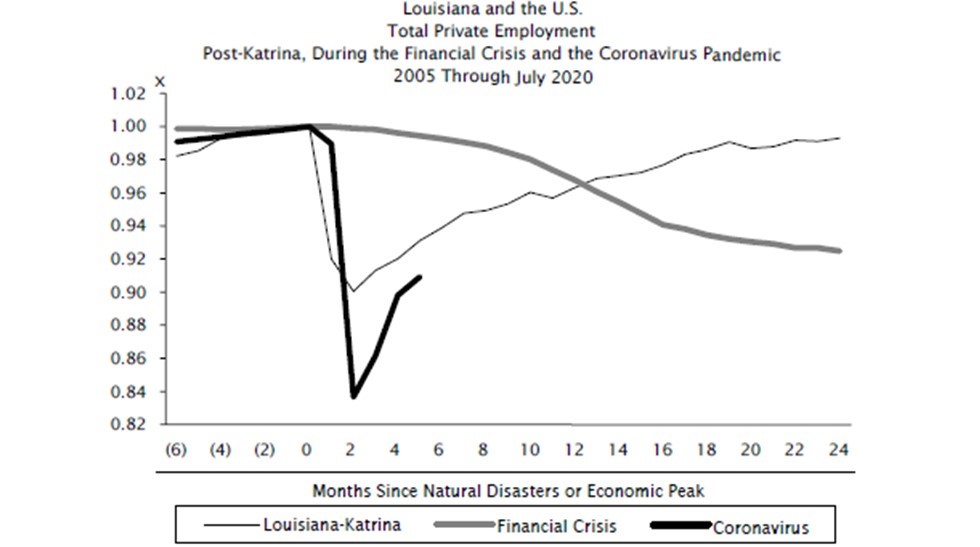