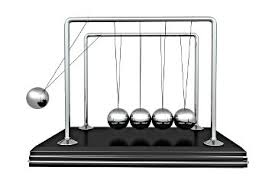 Where were you when you first realized that the coronavirus may be something serious and you changed your course of habits to manage your lifestyle more safely?  Angie and I were on a scheduled flight out of Honolulu returning to Minneapolis on February 1, the day after President Trump had instituted the flight ban from China.  I remember wiping our seats down with clean wipes. . .something I had never done before.

So, we have now had a little over four months of living like this.  I don’t know about you, but I feel a little like one of those pendulum desk top toys that goes from end to end. . . Somedays, I feel one way, somedays I feel another.  I go back and forth between health and the health of the economy.  A recent poll concluded, when having to make a decision on one or the other, that 63% of Americans are most concerned about health issues of the country and 37% of Americans are most concerned about the economic health of the country.

How have these habits affected the nature of sales, including funeral home retail sales, and how will a post-COVID world affect funeral service.

Retail Sales:  This article and video report dated Wednesday from Yahoo Finance indicates that retail sales are really jumping back as many stores opened in May after having some type of restricted sales in March and April.  As a matter of fact, retail sales in the United States had their biggest ever monthly increase of 17.7% for May over April which had followed the largest decline in history that was a 16.4% decline in April over March numbers.

Clothing jumped 188%, furniture jumped 90%, electronics jumped 51% and even large purchases like automobiles jumped 44% for that May over April period.  However, a statistic that may change American shopping patterns is that now a full 40% say they will continue to shop only online for the foreseeable future.

A Canary in the Coal Mine?:  We have heard all of the major public companies that deal somewhat in funeral and memorial services mention some type of comment in their first quarter earnings call that service revenues had been impacted late in the quarter (mainly March) do to the social distancing restrictions on funeral and memorial service gatherings.  At Funeral Director Daily we have heard public numbers from a loss of 8% of revenues per case to a private funeral home that we heard on a webinar mention revenue losses of up to 40% per case.

place to some degree all over the country.  The numbers that will be reported will be for a full quarter and not just for a small fraction of a quarter and could be quite telling.

However, if what is happening in Australia is an indication, funeral revenue numbers may start looking better once the social distancing requirements are eased.  It’s fair to say that Australia did not get hit with the coronavirus as drastically as North America and it is also fair to say that they have recovered faster.

In this article from the Market Herald, Propel Funeral Partners, the second largest death care provider in Australia and New Zealand, has seen their revenue numbers rebound.  They reported a decline of 10% of revenues per case in April, but that number rebounded to an 8% increase in May.  They attribute that increase to “the easing of funeral attendee limits in both countries”.

Funeral Director Daily expects the North American public funeral companies to report a decrease in revenue per case for the 2nd Quarter, however, if Propel Funeral Partners is an indication, maybe that trend can be limited to the 2nd Quarter.

The Mergers & Acquisition market:  Anecdotally, I have not seen or heard of major rumblings in this environment for the first six months of 2020.  Of course, at the end of last year there were some big acquisitions by Carriage Services, in Virginia and California,  and earlier in the year 2019 there was a big splash by Park Lawn Corporation in the St. Louis and Denver markets. And, StoneMor has mentioned that it will selectively divest some operations.  However, what I am seeing today seem to be smaller roll-ups by independents acquiring a competitor or neighbor, or like last week, where Foundation Partners Group added some additional rooftops to their Florida gulf coast group.

It seems somewhat obvious that there is a cautionary measure as to the pandemic’s long-term effect on how funeral services are conducted and, to a lesser extent, to what the Federal Trade Commission (FTC) is going to do with online pricing.  Another unclear issue is owners simply don’t know what the unknown expenses of operating a funeral home, in relation to safety and cleanliness issues, in the post-COVID world will be, and in my opinion, that sparks a little bit of caution on a buyer’s side.

To that same bit of caution, potential buyers have to be in the financial position to make an acquisition.  I think conservative companies that went into the pandemic with lots of cash will certainly have an advantage over those who may have rocky balance sheets that the pandemic may further erode.  The public companies may be waiting out to see where they end up as the pandemic eases up.

Some companies may play offense.  Here is what the CEO of Medtronics, the world’s largest medical device maker,  told a stock analyst the other day, “I think it is a good time to do M&A.  Asset prices are down. It doesn’t mean that we lower our standards. I just think, again, we can play offense.”

If funeral home operators have the same thinking as the Medtronics CEO, I’m of the opinion that once we get a little bit more clarity on some of these issues that there could be a wave of acquisitions, both by the large companies and by smaller independents acquiring neighbors who want to move on.  I base that, partly, on the assumption that some individual operators simply may not want to deal with whatever changes that a post-COVID world and FTC bring to the long-term aspects of the business.

Well, for what it is worth, you have a little bit of my opinions to ponder over the weekend.  Have a great weekend.  Stay safe!