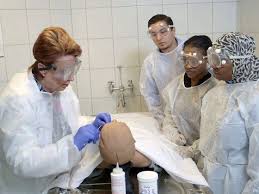 And it may be, that just when we need it most, that positive public perception may help the profession by supplying more trained and skilled workers just when we find ourselves in a labor crunch.  According to this article from WABC in New York, the United States mortuary colleges found an uptick in enrollment for the 2021-2022 school year of 24%.  That’s a very positive sign for the death care profession in this tight labor market where many funeral homes are looking for staffing additions.

That may not be the end of it as, according to the article, Leili McMurrough, program director at Worsham College of Mortuary Science in Illinois believes that this present school year may show even higher enrollments.  McMurrough also states about the shortage of skilled workers at this time,  “The shortage is so serious right now that there’s a 90% job placement rate for graduates of these programs.”

Randy Anderson, President of the National Funeral Directors Association (NFDA) is quoted in the article, “There’s an urgent need to replace those who have been in the profession for many years and are retiring.  Over 60% of funeral home owners said they will retire in five years. That’s a lot.”

The article points out that many people become a funeral director as a second career choice and the advent of online programs has allowed for an easier transition for many to that second career as a funeral director.  No longer does one have to quit their present employment to enroll in an in-person college.  They can simply enroll in an online course and do much of the work on nights and weekends.

According to the NFDA’s Anderson,  “Women currently make up as much as 72% of recent graduates of funeral services education”.

According to the article, “median wages for funeral industry jobs, such as funeral home managers was $74,000 and $48,950 for morticians, undertakers and funeral arrangers in 2021, according to the Bureau of Labor Statistics.”  Worsham’s McMurrough had this to say about opportunities, “You do have the opportunity to advance in just a few years from getting your college degree to becoming funeral director or even owning your own funeral home.”

Funeral Director Daily take:  This is obviously good news.  I’ve always thought that so many different types of people can make very good funeral directors.  It is a profession that is about science, it is about people skills, it is about patience, and it is about logistic planning.  But most of all, it is about being practical and courteous to those that you are serving.  I’ve told those in training for the profession that one of the biggest attributes, in my opinion, is not the academics but the ability to “think on your feet” and meet any situation with decisive action.

Even before I decided to become a funeral director my dad used to tell me “it is an honorable profession and you will “earn” a good and fair living a nickel at a time while “earning” the respect of your neighbors and your community”.  You know what. . . my dad was right!!