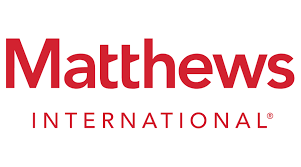 Matthews International reported their Fiscal year 2021 2nd Quarter results last week and with the report we noticed how it is impossible to not  notice that their Memorialization business segment which consists of Aurora Casket, Matthews Cremation, and their cemetery, memorial, and mausoleum division, is increasingly leading the company.

The other two segments of Matthews International’s operating portfolio consist of what they call their Industrial Technologies segment and their SGK Brand Solutions segment.  The company as a whole reported sales of $417.2 million for the months of January, February, and March 2021, which is an 11.3% increase over the 2nd Quarter of last year.

To illustrate how Matthews Memorialization segment has been the driver for the company, that $417.2 million in sales for the 2nd Quarter is $42.4 million more than the company’s 2Q 2020 numbers.  When broke into segments, the Memorialization segment increased sales by $43.7 million from Q2 2020 to Q2 2021.  In actuality, the other two segments of Matthews businesses had a combination of lower sales — the SKG Brand Solutions did about $1.8 million less in sales in Q2 2021 than Q2 2020 and the Industrial Technologies segment did have an increase of abut $0.5 million in the quarterly data.  So, in essence, virtually all of the Matthews revenue increase can be attributed to the Memorialization segment.

Here’s what Matthews CEO Joseph Bartolacci said in the Matthews quarterly report that you can read here, ““Sales for the Memorialization segment for the current quarter were $205.5 million, compared to $161.8 million for the same quarter a year ago, representing an increase of $43.7 million, or 27.0%. The segment’s sales growth predominantly resulted from increased sales of caskets due to COVID-19. In addition, sales of cremation equipment, mausoleums and cemetery memorial products also increased from the same quarter a year ago.”

Bartolacci continued to talk about the Memorialization segment looking into the future when he said this, “As expected, casket sales are anticipated to decline from the pandemic-impacted comparable months a year ago and recent increases in commodity costs such as steel, lumber and copper are expected to impact the coming quarters. However, the improvements in our other businesses are currently expected to lessen these impacts. . . . .Within the Memorialization segment, cemetery products sales have been constrained throughout the pandemic due to local stay-at-home orders limiting families’ access to cemeteries. We are already beginning to see these order rates returning to higher than normal levels.”

Steven Nicola, CFO of Matthews, also mentioned an acquisition of a cemetery products business in his discussion of the Earnings Call which you can read here.  Here is what he said about the Memorialization segment, “The quarter and year-to-date increases resulted mainly from increased sales of caskets due to the impact of the pandemic on death rates.  In addition, sales of cremation equipment, cemetery memorial products and mausoleums also increased. The company also completed an acquisition of a small cemetery products business during the quarter.”

Finally, we would be remiss to mention that Matthews International announced a large investment for manufacturing in their Saueressig subsidiary.  That company deals with energy storage and it appears that they are hoping to be one of the large energy (or battery) suppliers as the world moves to electric transportation.  Here’s a couple of articles from April on their decision to invest in a San Antonio plant:

Funeral Director Daily take:  It’s interesting in that I look at Matthews International, and specifically its Memorialization segment, much the same way as I look at the Batesville division of Hillenbrand Industries.

Matthews and Hillenbrand are two old generational death care giants who still operate somewhat in the death care realm.  Matthews started with iron and moved into Bronze in 1927 and Hillenbrand started with caskets.  Those businesses never seemed to be the exciting businesses people talk about, but they have churned out profits year in and year out for these companies.

With death care changing, some might say faster than ever, these death care grandfather companies are now using their cash-flow from their very mature death care operations to invest in other subsidiaries that may some day carry the weight of the companies.  I think that is a great idea, but I would also caution that they need to continue innovating and acquiring other businesses in the death care realm so as not to lose that profitability.

I recently read an article about a funeral director and funeral home owner purchasing three existing pizza franchises.  While that may or may not be a good move, the thought of successful generational funeral home owners to look at diversifying can also make sense.  The flip side to this argument has always been “stick to what you know”.  Both roads can be workable. . . . only an individual owner will know what is best for them.