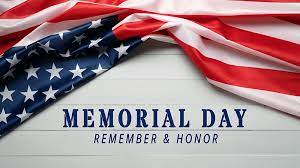 Memorial Day where I grew up and continue to live, Alexandria, Minnesota, is the un-official start of the summer.  My community is surrounded by lakes and Summer is special. . . . all of the seasonal residents move to town and the community is also filled with tourists through Labor Day.  Golf and boating season are both here for their short, but sweet and appreciated, periods of time.

For as long as I can remember I’ve kicked off Memorial Day at 10 am in the morning standing at the corner of 5th and Broadway watching the community’s short Memorial Day Parade.  At the parade we will clap in appreciation when we see our area’s veterans and active duty National Guard parade in front of an appreciative audience lining main street.  We will see our fire department and our police department showing off their new motor equipment by parading the vehicles in front of us.  And, we will see the high school band in their first marching performance before the end of the school year when they then turn to marching in various Summer parades around the state.  Finally, we will pay our solemn respects to the motorcade that drives our area’s Gold Star Mothers and Fathers down the parade route — parents who sent their sons and daughters off to defend the United States and never saw them return.

I’ve witnessed this event for over 60 years at the same corner.  Nothing seems to change in this unique American spectacle of remembering those we have lost.. . . .but things do change.  As timeless as this day is for me, I won’t see my friend Dan Olson at the corner of 5th and Broadway this year — he was one of our community’s victims of Covid-19. . . .and the veterans are different too.  As a funeral director I know a lot of the veterans from providing military honors at funerals. . . . but I won’t see my friends Larry Gasperlin or  Art Berg, or trumpeter Bill Flaig who was our hospital administrator and Chairman of the State Hospital Association, but never too busy to play Taps at funerals.  All three of those fine human beings have passed away in recent months after being part of our community for such a long time.

So, things do change. . . . .what doesn’t change is that undeniable American spirit and inherent goodness that moves the next person forward to fill the tasks vacated by those who have left our midst.  That “stepping up to fill the void” has been part of America since the days of the Revolutionary War. . . . and even when we question our nation about losing its way because of school shootings and political division, I’m certain that the best of America and the best of Americans will continue to move us forward in a positive way to remain a beacon of freedom for the world.

In February 2022, we lost one of those “Best” Americans — United States Air Force pilot Gail Halvorsen.  In a day when we are seeing infant formula airlifted to our nation, we all should be reminded about Major Halvorsen and his idea to airlift candy to hungry German children after World War II.  He became known as the “Candy Bomber”.

Here is a short video narrated by Tom Brokaw about Major Halvorsen’s story.  I think you will enjoy it. . . .and with it see the “Best of America”.

Here is Major Halvorsen’s obituary as seen on Legacy.com.

Finally, here are a couple of comments from those that watched the Brokaw video:

Enjoy Memorial Day. . . . and remember those “Best of Americans” who have let us continue to enjoy our freedom!

Memorial Day related:  You can click here to watch the National Memorial Day Observance live from Arlington National Cemetery.  The time period for this internet stream is 11:50 am to 3:00 pm (Eastern Times) on Monday, May 30.

Enter your e-mail below to join the 2,731 others who receive Funeral Director Daily articles daily: