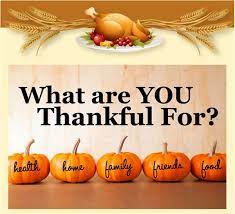 Maybe it is just because I’m getting older. . . maybe its because as I get older I see younger and younger people stepping forward to do some of the things I used to do. . . . maybe it is because as you get older you recognize that as much as you may have accomplished there have been people along the way that have been there to mentor and guide you. . . .

Regardless of why. . . . I find today that I am filled with gratitude.  Gratitude for my health, gratitude for a warm house with a roof over my head, gratitude that I was able to work and find worth in that work. . . gratitude for having a family. . . . you get the idea.  I think that you can agree with me that whatever it is that we worry about — today we should ease up on that worry. . . .and be grateful for those things and ideals that we have.

And, as a nation, we should feel good about the fact that we set aside a day to do just that.  It’s not about religion. . . it is about gratitude  — being thankful.

There’s been a lot of water over the dam in the last several years about who we are as a nation and it’s hard not to get caught up on one side or another of that discussion.  However, that should be put aside today and we should embrace the common goodness of who we are.

The two earliest colonial settlements in America were the Jamestown, Virginia, settlement under Governor John Smith which was in 1619 and the Plymouth, Massachusetts, settlement under Governor William Bradford which dates to November 1620.  It’s been argued and debated that the Jamestown colony came searching for economic reasons and the 102 passengers who sailed on the Mayflower with the Plymouth group were known as English “separatists” who came to begin a new religious community in the new world.

What we know about that first “Thanksgiving” of the Plymouth group was recorded in a letter dated December 11, 1621, and penned by Edward Winslow.  Here is a portion of it:

“Our harvest being gotten in, our governor sent four men on fowling, that so we might after a special manner rejoice together, after we had gathered the fruits of our labors; they four in one day killed as much fowl, as with a little help beside, served the Company almost a week, at which time amongst other Recreations, we exercised our Arms, many of the Indians coming amongst us, and amongst the rest their greatest king Massasoit, with some ninety men, whom for three days we entertained and feasted, and they went out and killed five Deer, which they brought to the Plantation and bestowed on our Governor, and upon the Captain and others. And although it be not always so plentiful, as it was at this time with us, yet by the goodness of God, we are so far from want, that we often wish you partakers of our plenty.”

It is interesting how Winslow has such gratitude (we are so far from want) in that during that first Pilgrim winter of 1621 his first wife was one of the many who perished on the soil of the new world because of hunger or sickness.  As a matter of fact, here’s how evangelist Billy Graham in his book, Hope for Each Day, described that first winter for the Mayflower passengers, “During that first long winter, seven times as many graves were dug for the dead as homes were built for the living.  Seed, imported from England, failed to grow, and a ship that was to bring food and relief brought thirty-five more mouths to feed, but not an ounce of provision.”

Yet, Winslow in his letter, found the ability to give thanks and have gratitude for what he did have.

Our lives are not perfect, we have worries, we don’t always get along. . . . but, today let’s start by having gratitude and giving thanks for what we do have.

Have a Happy Thanksgiving!!

Related — Here’s an article on Edward Winslow.  Rebecca Fraser, a British historian says, “He was hugely significant”.  As a matter of fact it was Winslow who was selected to go back to England and be the “designated defender” of New England’s reputation.  The article that I have linked says this, “In terms of his career, Winslow went further and higher than anyone else from the Plymouth settlement. He was the man selected first by Plymouth, and later by the emerging new Massachusetts Bay Colony to the north, to be the colonists’ liaison with London. In 1624, he returned to England to represent the interests of his fellow Pilgrims.”