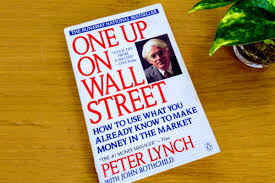 I was very fortunate as a youngster because I was schooled on investments and the market by my father.  Giving me, what is now termed “financial literacy”, is one of the greatest gifts I have ever received.  As a matter of fact, as a board member of a Big Ten institution, I have pushed our academic department, with the students’ blessing, to have a required course on Financial Literacy for all students during their Freshman year.  It has not been implemented yet, but I’m not going to stop pursuing it.

I’m a life-long learner and I continue to read and learn what I can about a myriad of topics. . . and financial literacy topics are one of my favorites.  Way back in 1989 I read a book authored by famed stock picker Peter Lynch entitled “One up on Wall Street”.  Essentially, it was his basics of how he had such a tremendous record as a stock picker.  One of his suggestions was not to always look for the “high flyer” but look to the “grind it out” companies for consistent growth over time.  One of the companies he suggested in that book was a dull, funeral home and cemetery operator named Service Corporation International (SCI).

Paraphrasing, Lynch put it something like this. . . “SCI and the funeral industry is a lot like the plastic knife and fork business.  It will never have huge yearly growth, but it is a business that will always have customers and will grind out profits year after year.”

I’ve thought about that phrase a lot this year.  Of course, Lynch in 1989 never considered a pandemic when he talked about those industries not having high annual growth.  But think about it this year when we have had an extreme amount of take-out or delivered meals.  I’m guessing that the plastic knife and fork industry has had a pretty good year.

And, of course we all know that because of COVID-19 deaths have increased death numbers about 15% nationwide and, after a period when service revenue fell through the floor, death care companies have been able to pull some of that revenue per service back up closer to normal.  That has led to, at least what we saw through the public companies’ September quarterly reports, a pretty good increase in death care revenues also.  It certainly would not be considered what Lynch suggested of a “grind it out” year.

And, if you had the courage to believe in our industry when the market was down in April of 2020, you could have garnered a better than 50% return.  While I’m not sure I have the low of the DCI because I did not track it daily, the DCI was as low as $200.49 on April 3, 2020.  Buying at that time and holding until the end of the year when the DCI was at $318.90 would have given a return of over 59%!!  Peter Lynch would tell you not to try to be a “market timer”, but sometimes “market timing” is everything!

The Funeral Director Daily DCI is made up of the cumulative price of one share of eight different public companies that conduct at least a portion of their business is in the death care space.  Those companies are:  Service Corporation International, StoneMor Inc., Carriave Services, Park Lawn Corporation, Hillenbrand Industries, Assurant, Matthews International, and Security National Financial Corporation.

Later in the week we will give a run-down on how these companies fared individually over the 2020 calendar year.

Webinar:  “How to nurture your business & your staff through COVID-19.” Presented by the National Funeral Directors Association (NFDA).  Presenters include Jay Dietz, VP of Operations for the Vertin Group and Jamie M. Hasty, Vice President with SESCO Management Consultants.  Scheduled for Wednesday, January 6.

Future Webinar:  “A WilbertEDU Session:  Survival skills, during and post-pandemic.”  Presented by John McQueen.  Get on your calendar. . .scheduled for Thursday, January 21.