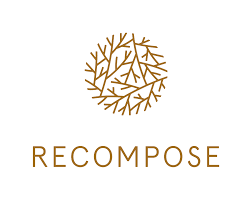 In December it will be a full two years since Recompose, the United States first human natural organic reduction (NOR) disposition service was legal and open for business.  NOR is more commonly known as “human composting”.

We thought it might be a good time — on the precipice of the business’ second anniversary of being open for business to check in and see how things are going.  We did so, not with an interview but with information from this recent article from CNN Life and information we obtained from Recompose’ own website.

According to the article “Recompose has composted more than 200 corpses into soil since opening“.  In addition, they have used their pre-arrangement program — that they term “Precompose” to sign up another 1,100 future NOR cases.  From my point of view, in comparison to a new funeral home opening. .  doing 100 cases per year in your first couple of years out of a single facility and signing up about 550 future cases annually sounds like a pretty respectable opening.

Like any business, it all depends on costs of operation and the prices a company has to charge to be able to eventually operate profitably.  From Recompose’ website we notice that their pricing per case is $7,000 with some additional options available.  I can remember that when they were not yet operating that the pricing was planned to be around $5,000 per case.  However, like most start-up businesses, I’m guessing that operations that were unknown to them prior to starting have cost more than they imagined.  That’s pretty common.

The interesting fact that I see about Recompose pricing is that it is “in line” with what consumers may pay for other types of disposition services.  It certainly is more than direct cremation but less than traditional earth burial so there is precedent and factual knowledge that price will not keep people from using their services.

Quite frankly, I don’t think price will be hinderance in their operations as the choice of NOR as a means of final disposition is, in my opinion, much more about lifestyle than price.  I’m guessing that some people would even pay a premium price for the service.

I also find the fact that the company has pre-arranged or “Precomposed” 1,100 people in a two year span to be an indicator that this process of human disposition will have staying power moving forward.  And, as you can see here, that the National Funeral Director’s Association (NFDA) survey showing that interest in “Green Funeral” options, which NOR is considered, has grown from 55% of the population to 60% of the population in only one year’s time is a sign of that growing acceptance also.

I also did a little research from obituaries listed on the Recompose website.  I took a random sample of 30 obituaries and indexed for the age of the decedents.  What I found was that the average age of someone using Recompose for NOR upon death was 71 years.  The eldest among my random sample was 97 years of age and the youngest was 30 years of age.

I found that average age of 71 interesting.  The average life expectancy in the United States as of 2021 is 76.1 so it is not so far off of that number and does not represent, as some people expected, only younger people to use the service.  I see that age number as reflective of the process being accepted by all age levels. . . which is important for something to get into the mainstream of society.

Finally, in my opinion, Recompose’ growth may actually be helped by the fact that the type of legal dispositions, must be regulated by state laws.  The fairly slow roll-out of that legality may help the company to raise money as needed for new facilities in differing geographic locales as it continues to grow its initial location in the state of Washington.

It is my understanding that NOR has now been legalized in the states of Washington, Oregon, Colorado, and Vermont. . .with California also legalizing but not until a 2027 start.  And, according to the article New York and Massachusetts may not be far behind.

So, suffice it to say, that in only two short years the idea of natural organic reduction for human disposition has seemed to gain a following. . . and leaders who are committed to bring it to the mainstream of American death care options.

Enter your e-mail below to join the 3,014 others who receive Funeral Director Daily articles daily: