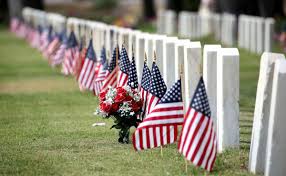 Monday will bring Memorial Day to those of us in the United States.  It is a day like none other.  Not only does it serve as the weekend when summer begins, but it ultimately is the day all Americans should solemnly, sometime during the day, ponder and give thanks to all who were willing to serve in our country’s armed forces and be ready to give their life for the values that America stands for.

Today’s holiday is born out of a history that dates back to just after the Civil War when citizens were asked to “decorate” the graves of those who had lost their lives in that war between the states.  From Decoration Day grew Memorial Day which became a National Holiday in 1971.

However, 2020 will be an unusual Memorial Day.  This year because of the coronavirus pandemic, the hollowed Arlington National Cemetery will be closed to the general public as only those with a “family pass” will be allowed to visit graves.  In addition, all family members “must wear their face coverings in restrooms and at all other times while in the cemetery where they are unable to maintain a six-foot social distance.”  No non-family members will be allowed in Arlington Cemetery.

The additional 142 national cemeteries run by the Department of Veterans Affairs, which represent more than 4.7 million grave sites, will remain open to the public.  However, wreath laying ceremonies and the playing of “Taps” through the Memorial Day weekend will be closed to avoid public gatherings at the veteran cemeteries according to this article.

The Veterans’ Administration has also issued information about this year’s Memorial Day that you can access here.  VA Secretary Robert Wilkie states in this notice, “This year, by necessity, will be different from past Memorial Day observances.  While the department can’t hold large public ceremonies, VA will still honor Veterans and service members with the solemn dignity and respect that they have earned through their service and sacrifice.”

To that end, each VA national cemetery will conduct a brief wreath laying ceremony, accompanied by a moment of silence and the playing of Taps.  In keeping with CDC (Center for Disease Control) the ceremonies will not be open to the public.  Other public events typically associated with Memorial Day at national cemeteries, including group placement of flags at grave sites, will not take place.

(The) VA will also be launching a new way for the public to pay tributes to Veterans at the Veterans Legacy Memorial (VLM). The site, originally launched in 2019, contains a memorial page for each Veteran and service member interred in a VA national cemetery. Since May 14, VLM has permited online visitors to leave a comment of tribute on a Veteran’s page, introducing a new way to observe Memorial Day. The tribute allows visitors to voice memories and appreciation for a Veteran’s service. All comments will be reviewed for appropriateness prior to being posted.

Funeral Director Daily take:  I have to admit, this is hard for me.  I’m a traditionalist and my work in funeral service has given me great respect for those who were brave enough to wear the uniform of the United States armed forces.  It is really hard for me to contemplate that we will not be giving these men and women our full measure of our devotion to them on this day.

In my small community in Minnesota I have watched the high school band march playing patriotic songs followed by all of our community’s armed forces survivors being honored on main street for my entire life.  I’ve stood on the same corner during this parade and the older I have got, the more I respect those service members marching. It is hard for me to believe that I won’t be doing that on Monday.

I also understand the situation we are in today and the Veteran’s Administration is taking their cue from what the experts on disease and risk control are telling them.  I understand that, but I admit, I struggle with it. . . . . .yes, there would be risk associated with opening our national symbol of remembrance – Arlington Cemetery.  But, it is a big place, and I think the risk would be small, and in my opinion, a gesture that gives hope that this virus, just like the enemies these buried soldiers faced,  cannot defeat us. . . . . General Washington faced risk crossing the Delaware, our soldiers that stormed Normandy faced risk in taking those cliffs, America faced risk in racing to the moon. . . . calculated risk has been a part in just about everything that America has accomplished since its inception – including the risk that all of those interred at Arlington National were willing to take for this nation. . . . In my opinion, taking the risk to open Arlington Cemetery for the day – especially when 142 other national cemeteries are being opened – to give the interred the respect they deserve, should be warranted.

This weekend, may God Bless those who served in our armed forces. . . . I salute you!!