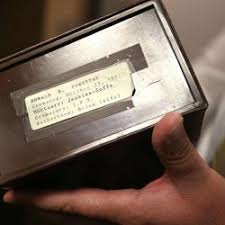 The article that I just read was all about Cremation #17263 that was left at the York, Nebraska, non-profit known as Blue Valley Community Action of York.  The cardboard box was left at a drop there in the middle of the night.

It was discovered, according to the article you can read here, by volunteer Terry King who proceeded to open the cardboard box and discover Cremation #17263.  The article goes on to say that the police department was called, the local mortuary was called, but it would take some effort to find out more about Cremation #17263.

I read that article last week shortly after Funeral Director Daily had published our “Get to Know Them” person of the week — Nicki Adams Price.  It struck me, as I went back and reread Ms. Price’s interview, that this was exactly the problem she was referring to on Question #5 –“What do you believe is the biggest challenge facing the Death Care community in the next decade?”

So you don’t have to go back and reread the article, here’s how Ms. Price answered that question.  “I believe one for the biggest challenges facing the profession is communicating the importance of permanent placement for loved ones cremated remains. . . .We need to work together to improve how we educate families on options for permanent placement in cemeteries, options that will aid families along their grief journey and leave a legacy for generations to come.”

Wow, the abandoned cremation remains at a non-profit really points out in reality the issue Ms. Price speaks about.  And, as a funeral director who has seen values and norms change over my thirty plus years of helping families come to a solution for permanent placement of mortal remains, I see a big problem here also.

I don’t blame anyone.  I see families many times wrestling with the best of intentions to delay the decision about permanent placement of remains.  I also, however, see these delays become permanent and not in the forefront of needing to be done once grandpa or grandma is put in a closet and forgotten about.

No human life should be left in a closet or on a donor table of a non-profit.  We, as a human society, are better than that.

So, I’ve found myself on a soap box here in asking all funeral directors, when they make funeral arrangements, to press for that intentionality about permanent placement or other intentionality, such as scattering, of decedent remains.

As funeral homes and cemeteries look for more revenue this area is truly an area where I feel more revenue can be gained.  For families that don’t have that intentionality there needs to be more of an “informational sales approach”.  Funeral directors need to talk more freely of earth burial of cremated remains, of columbariums, and of jewelry designed for cremated remains so that these families know all the options.  And, don’t forget, pressing for that intentionality and an answer during pre-arrangements will lead to more concrete plans more than likely increasing the at need sale price, the preneed amount, and an increased profit to the funeral home.

In other words, funeral directors and preneed counselors can make sure “intentionality” works for the betterment of all parties involved.

Ruth Virginia Brown was born on August 12, 1921.  And as non-profit volunteer Terry King is quoted in the article, “We have been able to put together some of the parts of the puzzle, but there are still many details that we don’t know. . . how did she come to York?  Who donated her (to the non-profit)?”

The best part of this story is how the people of York, Nebraska, came together to give some intentionality into the memorial placement of Ruth Virginia Brown.  A free grave was donated at St. Joseph Catholic Cemetery, Wegner Monument and Metz Mortuary made sure that Ms. Brown would never be forgotten and the article states, “A group of about 20 Yorkites, from all walks of life, education levels and faith came together in an act of love Monday, November 2, 2020, as Ruth was sent to her final destination.”