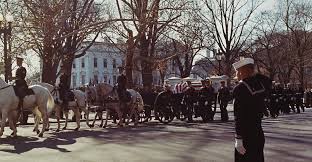 So, one of the great things of growing older and living for six decades is that you gain perspective.  I started to think of that over the weekend when I both celebrated an anniversary and learned of the news of Sen. John McCain’s death and the funeral arrangements for singer Aretha Franklin.  Angie and I discussed how our perspectives on many things have changed as the years have gone by since we were married.

Hearing of Sen. McCain’s death brought back memories I have as a 5- year old and the death and funeral ceremony of President John F. Kennedy.  Then, on Sunday I read about the plans for the upcoming services for Aretha Franklin and wondered – in the 55 years that passed since the Kennedy funeral – how the American funeral has become more of a celebration rather than a ceremony.  You can read about the Aretha Franklin funeral plans here.

Now, don’t take me wrong here – because the funeral services are something that the nation, or the fans, or the family wants – and it is my opinion that what they want, they will feel good about and that is up to them.  I’m just saying that in 55 years America has really changed our funeral plans from those of ceremony to those of celebration.

I think back to when I started as a funeral director.  I grew up Lutheran and was really comfortable with those services and the ceremony that each entailed.  My father died when I was a teenager and it was the church and the funeral home that really set up the service – we didn’t have much to say.  But, it was also “the ceremony” that added comfort to us – because it was the way to do things in our community.  I look at the death of JFK and the reverence in what was done and saw much of the same.  It was the “ceremony” that was comforting.

For Ms. Franklin’s funeral on Friday we will see “Performances” by Stevie Wonder, Jennifer Hudson, Chaka Khan, Faith Hill and others.  There will be speakers such as governors, attorneys general, and ex-Presidents.  It is my opinion that the comfort will come in the form of “Celebration” rather than “Ceremony”.

As a Christian person, however, I do see a difference.  The old church ceremony, in my opinion, touched on the deceased’s life, but the focus and comfort was on looking ahead to the potential for the everlasting life to come.  It seems to me that the celebration service is more rear focused and maybe has a eulogy which will touch on the life to come, but the main focus is on the here and now and the life that was lived.  That is a distinct change from a generation ago.

I don’t have any great conclusions on this other than to say it probably reflects America as a whole – in that we are a less churched society than in years past.  I believe that being “less ceremony comforted” has led to the fast growth of direct cremation as a disposition.  I also think it is important that funeral directors understand this phenomena so that they can offer their clients what they are looking for.  Does your next client family prefer “ceremony” or “celebration”?  How you react to their preference may tell a lot about how you move forward in profitably servicing families needing death care in the future.