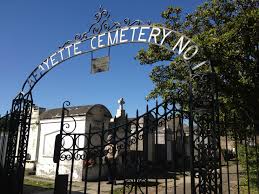 New Orleans, Louisiana, is known as a great American city.  Because the city sits about 15-18 feet below sea level and has levies protecting the city its cemeteries are well known for their unique above ground burials in some places.  Because of some of these type of land issues, the city itself has found itself in the cemetery businesses by owning six cemeteries within the city limits.

And lately, the city has became known as one of the American cities where the COVID-19 pandemic has been termed a “hotspot”.

Now, those facts, the city being in the cemetery business and the high number of COVID-19 deaths,  are coming together with the city government announcing a plan to build a new cemetery in the Gentilly neighborhood.  Ramsey Green, a city officer is quoted as saying, “This particular location is being considered because of its location on high, safe ground; its affordable costs, and its availability based on current need.”

You can read about this issue in this article from NewOrleans.com.

However, as you can imagine, the people in the Gentilly area are not necessarily for a new cemetery in their neighborhood.  According to the article, residents say “that the city is using the coronavirus to ram through its new cemetery plans, and that placing the graves behind their homes on Warrington Drive will exacerbate neighborhood traffic. . .”

The City of New Orleans owns six cemeteries, that you can see here, and the last time a new public cemetery was acquired was nearly 100 years ago in 1921.

Funeral Director Daily take:  Creating and building a new cemetery, anywhere in the United States, is not something we see much of anymore.  As a matter of fact, I cannot remember the last article that I came across concerning that issue.  Expansion of cemeteries- yes, we’ve seen those, but new cemeteries, I just don’t remember.

I looked up the Cremation Association of North America (CANA) statistics for 2017 on cremation and found that, percentage wise, Louisiana ranks about 47th out of 50 for percentage of deceased citizens cremated at 33.3%.  That compares to a national average for the same time period of 53.4%  You can see those statistics here.

It will be interesting to see how this story turns out.  If the cremation rate stays relatively low by consumer choice, some type of permanent solution has to be found.  Land for full body burial or entombment will have to be acquired and readied.  It is also interesting that this is not, at least from my point of view, a pressing issue in other parts of the country where grave space is limited, partly because the cremation rate has grown to such a high degree.

Could New Orleans become one of those few cities where the cremation rate rises simply because the availability and/or cost of cemetery space for burial or entombment is prohibitive to many of its citizens?