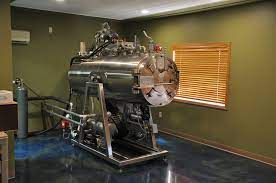 There is a battle being waged over the human disposition method called “aquamation”, also known as alkaline hydrolysis or flameless cremation. But, most of us are just too busy or are comfortable with disposition in the form of earth burial or cremation to really notice it.

I find it interesting in a world where everything seems to be “Green” that more people are not talking about aquamation.  According to this article from Time, “aquamation . . remains rare in the United States and faces powerful opposition as states try, one-by-one, to make it legal.”

Proponents of aquamation say that the environmental impact of the process should outweigh any other arguments that people have about its use.  Again, according to the Time article, “each year burials in the U.S. use about 4.3 million gallons of embalming fluid, 20 million feet of wood, 1.6 million tons of concrete, and 64,500 tons of steel. .and transporting of those materials produce 250 lbs. of carbon emissions annually, while fire cremation produces 1.74 billion pounds of carbon dioxide emissions.”  In contrast, according to the same article, “aquamation uses about 90% less energy than a flame-based cremation and releases no harmful greenhouse gas emissions.”

Finally, an aquamation quoted in the article was billed at only $1,500 whereas a direct cremation was comparable and the NFDA national average price for a funeral with burial and vault is listed at $9,420.  So, price should not be an issue.

Yet of about 1.8 million cremation type dispositions done in the United States in 2020, only about 18,000 were of the “flameless” cremation (aquamation) variety.  So, where is the hang-up?

According to CANA (Cremation Association of North America) since 2011 when the process was first used by United States funeral homes on human cadavers, about 20 states have approved the process for human disposition with about nine more having pending legislation.

Again, according to the Time article, the states with pending legislation “face powerful opposition from the Catholic Church and cemetery groups.”

Here again is a quote from the Time article on that point, “In written testimony in April 2021, the Wisconsin Catholic Conference said the manner of discharge was disrespectful, largely because “wastewater does not honor the sacredness of the body.” Similar arguments made by the Diocese of Manchester, the Catholic Church in New Hampshire, stymied efforts in that state in 2014. “Flushing away human remains” dishonors the dead, says Robert Dunn Jr., the diocese’s public policy director. “The issue of disrespect for human remains is something that outweighs any of the other arguments that might be made in favor of this.”

It’s estimated that the water used in aquamation is about 300 gallons — about the same amount an average household uses in one day.  A spokesman for a municipal water facility mentions that is a very small amount in a city where over 70 million gallons are discharged daily.  Nonetheless, it is not the amount, but the thought of releasing that effluent into a municipal system that creates the barrier with the Catholic Church.

Funeral Director Daily take:  I’m a believer in alkaline hydrolysis, just as I am in natural organic reduction (human composting).  Even though neither of those processes is what I would choose at this time in my life, I find nothing wrong with the methods for those that want to use them.

I also understand the Roman Catholic Church dioceses mentioned in the article and can see their point of view.  I’m a Christian Lutheran who understands the sanctity of the body — and church elders smarter than I have to reason with this process.  The Catholic Church eventually accepted cremation of the body. . . .will they accept aquamation in time?

In the meantime, I think market forces will drive these (natural organic reduction and alkaline hydrolysis) methods of disposition into the mainstream.  And, I think the environmental consciousness of the next generations will lead that movement.

I don’t believe that there is anybody on the planet against renewable energy.  However, how we make that transition — overnight and forced by government or with market forces and over-time — seems to be where the argument is.

And, as we mentioned with the green funeral movement in a column last week, infrastructure and being able to do the services is a must before these methods move into the mainstream.  In the case of alkaline hydrolysis that infrastructure is the machines, much like flame cremation machines, that are readily available in our nation’s funeral homes.  It is my understanding that as of today there are about 3,300 licensed flame crematories in the United States and less than 40 licensed human alkaline hydrolysis machines.  Funeral homes will need to invest in this technology as aquamation becomes more popular.

Enter your e-mail below to join the 2,640 others who receive Funeral Director Daily articles daily: