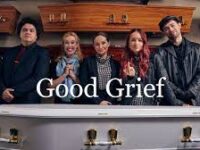 Good Grief to be seen in USA, Canada, and Great Britain

It was announced recently that the New Zealand comedy series, Good Grief, has had its North American and United Kingdom rights purchased by the AMC Network.  You can see a clip of the series here. The series, which is entering its second season, is co-created and co-written by Eve and Grace Palmer who also star in the series as Ellie and Gwen Goode.  According to this article from Deadline, “it is a comedy series set in small New Zealand town […]