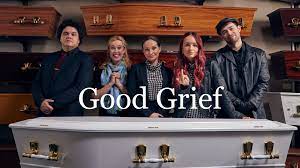 It was announced recently that the New Zealand comedy series, Good Grief, has had its North American and United Kingdom rights purchased by the AMC Network.  You can see a clip of the series here.

The series, which is entering its second season, is co-created and co-written by Eve and Grace Palmer who also star in the series as Ellie and Gwen Goode.  According to this article from Deadline, “it is a comedy series set in small New Zealand town and follows two millennial sisters with very different personalities who inherit a funeral home from their grandfather.”

More information, according to the Deadline article states, “Recently fired from her teaching career, Ellie starts to warm to the job, but all Gwen wants to do is go DJ in Bali. By staring death in the face every day, Ellie and Gwen begin to confront the realities of their own life, and what they want to make of it.”

According to the article, Good Grief will makes it U.S., Canada, and United Kingdom debut on September 30 on the Sundance Now channel and will also be able to be seen on the IFC channel beginning on October 4.

Dan McDermott, President of Original Programming at AMC says this, “After watching the first season, we were so in love with the Goode sisters that we jumped at the chance to work with Eve, Grace, Nick, Kiel and Kerry to commission further adventures with them.”

Here is some information on Good Grief from IMDb

Here is some more information (including a preview trailer) on Good Grief from Flicks.