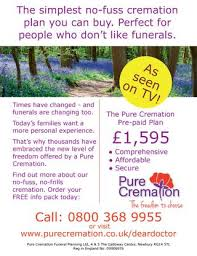 Pure Cremation, the company that was started in the United Kingdom in 2015 recently announced that it will have received a total of US $10 million in funding for its low cost model of simple cremations following death.  According to this article from Evening Express which you can read here, Elliot Kaye, an investment director at Puma Investments said this of the company, “his firm is putting money behind what he hopes is a winning combination of an experienced management team with a very disruptive business model within a very established market.”

The company carried out over 1,000 cremations in 2017 and is on target to carry out over 2,000 in 2018.  According to the article that is about a 5% market share of cremations for all of the United Kingdom.  Mr. Kaye also mentioned, that the investment “will allow the business to scale significantly.”  Much of the investment will be used to help the company build a crematorium so they do not have to rely on third party providers.

While the cost of Pure Cremation’s services to a family start at about US $1600, Mr. Kaye believes that cost is not the driving factor of the company’s rapid growth.  “The country is getting less religious and also less traditional across the board”, he said.

Funeral Director Daily take:  This company sounds a lot like a lot of the United States regional cremation societies or, on a national scale, like Service Corporation’s Neptune Society.  I think the idea of keeping it simple and providing only one service – cremation disposition of the body – can be a profitable niche when done from a low cost perspective.  As a matter of fact, if they keep it simple they may be able to drive down both their costs and the consumer’s cost and create a very high volume and market share where the efficiencies can drive profits up.

It is difficult though, for companies not to try to be “everything to everybody”.  I recently watched the movie, “Founder” about the creation of the McDonald’s Corporation.  Serving burgers, fries, and malts within a 45-second framework is what made the company stand out from the rest.  I was in a McDonald’s the other day and noticed that they had so many items on the menu that after I ordered it took this “fast food” restaurant over five minutes to serve me.  Founder Ray Kroc would not have been happy.

I believe for Pure Cremation to succeed – in the low-cost and mass marketing world of direct cremation – and bring profits to the bottom line they cannot be tempted to chase after additional revenue of conducting services, printing folders, and the like.  Leave that to the family to do on their own.  My bet is that doing the low-cost disposition of the remains, and doing it well is where they can prosper.