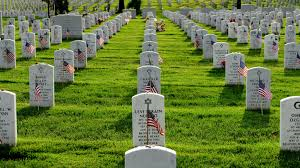 On Thursday, and in advance of Memorial Day, President and Mrs. Trump visited the hallowed land of Arlington National Cemetery.  You can read an article about the visit here.  The visit was held ahead of the traditional Memorial Day visit as today (Friday) the President will be leaving for Japan on our country’s business.

Arlington National Cemetery is the resting place for over 400,000 who served in the United States military service.

In my opinion, the President’s annual pilgrimage to Arlington National is symbolically significant to the United States death care community.  It represents the best of how we care for our hero dead and shows a long history of solemnity for all those who have preceded us in death.

As a child, and as a young funeral director, a quote from the 19th century British Prime Minister William Gladstone was situated in a prime position in our funeral home.  I learned it and tried to live by it during my 35 years in the funeral profession.  Here it is:

“Show me the manner in which a nation or a community cares for its dead and I will measure with mathematical exactness the tender sympathies of its people, their respect for the laws of the land, and their loyalty to high ideals.”

I know funeral service and the profession is changing.  However, I cannot help but think, “Do we continue to be a nation in which Gladstone would believe that we have loyalty to high ideals?

Have a great Memorial Day and remember someone who was significant to you during the day.