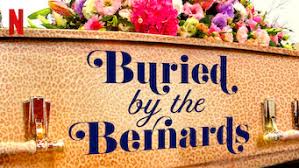 A television show about the goings on in a funeral home is nothing new.  I can remember the shows “Family Plot” and “Six Feet Under”.  Last Friday night, Netflix premiered the newest franchise in funeral television when they aired the first episode of “Buried by the Bernards“.  This article and video shows the family having a small viewing party at their funeral home to celebrate the occasion.

“Buried by the Bernards” is a reality show that follows the Memphis based members of the family and their work at their funeral home.  The Bernard’s funeral business was founded in 2017 and features such things as a drive-by visitation area.

According to the aforementioned Memphis article, the Netflix series will span eight episodes and feature the “bickering but big-hearted Bernards”.

This review from Decider calls the show  “a reality sitcom in the mold of shows like Pawn Stars or the funeral-home set series Family Plots.”  Here’s more from the Decider review,  “Who knew that the funeral business could be so fun? That’s the thought that kept popping into our minds when we watched Buried By The Bernards. It’s pretty obvious that, while respecting the deceased and their families, the Bernards aren’t your usual vision of the solemn funeral directors, speaking in hushed tones. Of course, that also means that situations are semi-planned and/or semi-scripted.”

Another review from Vulture, that you can read here, questions if during a pandemic where almost 500,000 Americans have died is the right time for this type of show. . . .they then flip that thought and wonder if it is exactly the right time for the show.  Here’s exactly what Vulture said:

“. . . .It’s a fantastic premise for a sitcom, but I had a hard time moving past the presence of real corpses on the margins of this show, real families whose dead loved ones were sitting there as a backdrop to fun goofs. Someone died. Lots of people have died! It has been an especially brutal time for people of color, Black families like the Bernards who are disproportionately affected by this mass cataclysm. Are fun funeral-home high jinks really the right tone?

Maybe this moment, almost a year into a pandemic, is an astoundingly good time for a warm, generally loving, matter-of-fact and unafraid reality show about a family who runs a funeral home. The episodes were filmed almost entirely pre-COVID, so the pall of the overrun funeral home and the sadness of a Zoom memorial service have not yet arrived for the Bernards. It’s a little island of pre-pandemic normalcy, where the family can gather together to shoot a deliberately hilarious commercial advertising their low, low burial prices without thinking about how many families will be desperately in need of a way to save on caskets. “

Funeral Director Daily take:  I have not seen the show, but having it be described as a comedy in a real-life working funeral home is far from how I worked every day in my professional life.  I never worked with families who were looking for funny answers, I worked with families who were serious about celebrating and memorializing people who played major impacts in their lives.

Many times there were high obstacles to get things done exactly how they wanted. . . maybe finances were a problem, maybe the clergy or facility was not available on the proper day, maybe services needed to be in two separate geographic locations hundreds of miles apart, maybe the deceased died in a distant locale.  Whatever the obstacle was, I worked in unison with the family to find middle ground that could satisfy their requests.

It was those accomplishments that gave me a sense of satisfaction over almost 35 years on the front lines of funeral service.  Maybe I’m just too old, but a sense of decorum and dignity seems to be missing when we use the pain and loss of others for comedy.  I have yet to watch the show, but from the reviews, I don’t think I’ll be adding to the Neilsen ratings.