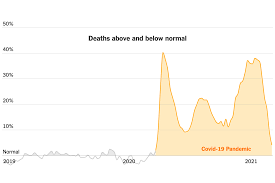 The United States released its annual report by the Trustees of the Social Security and Medicare Programs earlier this week.  In that report, which you can see a summarized article here, we get an idea of what the federal government thinks about death rates going forward.

The report concludes, as to the national death rate, “The federal government expects U.S. mortality rates to be elevated by 15% over pre-pandemic norms in 2021 and not return to normal until 2023.”  The article also mentions that between 613,000 and 783,000 more Americans  have died than would have been expected in a pre-Covid pandemic world.  It’s also mentioned that deaths are increasing at this time, but “vaccinations against the virus should keep total mortality well below peak levels of more than 3,300 per day that the nation experienced in January (2021)”.

Senior officials mention in the report that “. . .it is hard to determine how exactly the pandemic could affect the country’s retirement system after 2024.”

A couple of other interesting items from the report:

Funeral Director Daily take:  As I mentioned, there is a lot of great information in the linked article and report.  However, in this venue, we need to ask what, if any, effect does a 15% increased death rate over about three years do for the death care industry in the long run?

I think back to March of 2020 when I was called by a reporter at Barron’s (financial magazine) to opine on what the Covid-19 pandemic would do to the funeral industry.  My answer was an educated guess that, especially with social lockdowns, that there would probably more deaths in numbers but the revenue garnered by the funeral homes per case would be less.  And, that mathematical equation would, in essence, be the result.

We now know that there was a greater number of deaths per funeral home.  We also know that funeral directors were very resilient and imaginative in how they could help families pay tribute to, and memorialize, their loved ones.  Zoom arrangements became very normal and streaming of services became popular.

At the end of the day, we got some indication from the public company financial data that funeral homes and cemeteries were able to have high profits, mainly because of the increased number of deaths and keeping revenue numbers per case from falling too far from the norm.

The next question will be, as death rates moderate back to normal or maybe even lower than normal because of what we call the “pull-forward” affect, can funeral homes stay profitable in 2023 and beyond if they have less than an average amount of cases?

The report also says this, “. . . the people who succumbed to the virus were disproportionately old, one official said, meaning that the surviving population may be somewhat healthier than had been projected. . .”

So, if that is true, it would be expected that the population remaining is a healthier population than prior to the Covid-19 pandemic.  Does that mean that funeral homes will see a decline in business for the immediate future come 2023?

I would expect that the demographics and potential death rates to come will lead to an ever increasing consolidation of businesses and lowering of operating costs to deal with what may be a reality.  On the other hand, it’s long been predicted that the Baby Boomer generation of death care will create boom numbers only a few years hence.

Good operators will look at these past statistics and potential trends to make their decisions as they move forward.