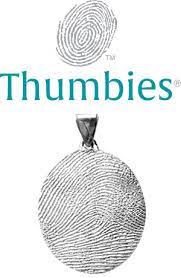 In this news release from Messenger News you can read about the Messenger Company and its acquisition of the Thumbies Fingerprint Keepsakes business.  The release states that “the new addition to the Messenger family of companies will allow the Messenger team of sales representatives to offer the complete line of Thumbies jewelry in their portfolio of products, supporting the needs of funeral home partners across the country”.

Kevin Tkacz, President of Messenger, added this comment, “This acquisition allows Messenger to leverage our core competencies and invest in remembrance offerings we feel passionate about”.

Established in 1998, Thumbies is the original fingerprint keepsake provider.

Funeral Director Daily take:  I put Thumbies in the category of Memory Glass, Eterneva, Parting Stone, and other items such as cremation dissolved tattoo ink used for personal tattoos as products of what I call “The New Memorialization”.  While Thumbies are not a vessel to hold cremated remains as the others are, it is a well-known “Remembrance” product using a unique personalized fingerprint to give that “idea of remembrance” to the wearer.

I consider myself somewhat “old school” yet possess the rationale of having an “open mind” to new ideas.  Personally, I believe that “Permanent Memorialization” of loved ones — that meaning that remains being put in a permanent place such as a grave, mausoleum, columbarium, or even a memorial forest with identifying marks as to who and when– is the best way of memorialization for many reasons.  Not the least of those reasons include the ability to visit the site and the ability of the site to remain for relative perpetuity.

That being said, I’m aware that many people don’t agree with me and as we continue to move forward as a society there will be less and less percentage of the dead “permanently memorialized” in a cemetery and more and more of a percentage using “New Memorialization” methods for what I term “Personal Memorialization” by loved ones.  This personalization of memorialization allows family members to “remember” in their own way and includes such products as cremation jewelry, Memory Glass, memory candles, solidified remains such as Parting Stone, cremation ink tattoos, and more including having remains deposited at coral reefs or being launched into space and orbiting the earth through companies such as Celestis.

Then consider that the same NFDA report indicates that the death rate by 2040 will have jumped to about 10 deaths per thousand population as compared to today’s rate of 8.3 deaths per thousand population and the U.S. Census Bureaus estimation that the United States will have 379 million people by 2040.  Using those numbers with the 57% of cremated remains with no plans for permanent memorialization gives a universe of about 1.7 million deaths as potential customers for these products annually.  And, when you consider that each death may leave multiple mourners looking for that “Personal Memorialization” product, I believe that the future potential for these companies is on a solid upswing.

Disclosure — The author of this article is a shareholder of Parting Stone.