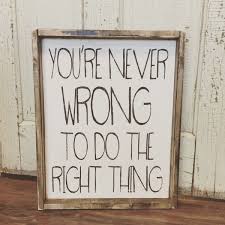 I’ve been around the death care business for a long time and I’m certain that I didn’t always make the correct decision in the many hundreds of decisions that I had to make every month.  However, I can tell you that I always wanted to “Do the Right Thing.”  And, the times when I realized that it turned out that I didn’t do the right thing. . . always bothered me.

Doing the right thing isn’t just tied to the death care business.  What about when the cashier gave you the improper change. . . did you give it back?  What about the scorekeeper opponent in golf who asked if you had a five on that hole when you really had a six.  Do you do the right thing and give the extra change back and/or correct the score. . . .even if it goes against you at the time?

As funeral directors consumers look to us for trusted decisions at some of the toughest moments of their lives.  We owe it to them, and our profession, to always do the “Right thing”.  Handle the deceased with care, give your best efforts, charge the appropriate amounts. . . . . those are the “Right Things” that the consumer believes he is paying us to do.

I saw this video news story and article from WATE-TV in Knoxvile, Tennessee, the other day.  Reading it saddened me with the fact that someone neglected to do “The Right Thing”.  The article is about the Brushy Mountain Prison Cemetery in Tennessee.  Turns out that the prison closed about 12 years ago with an adjoining cemetery containing the deceased remains of about 600 former prisoners.

For several years it appears that prison grounds neighbors Don Cox and Charlie McGhee took it upon themselves to care for the grounds.  However, with those gentlemen at age 85 they cannot do it anymore . . . .and no one has stepped up to do so.

The cemetery is much overgrown.  Cox has been able to identify from death certificates about 130 men buried but says that still leaves many more to be done.  According to Cox, the first burial was in 1896 and the last prisoner was buried in 1963.

Cox said in the article, “I want to see it kept mowed, I want to see the road built over here.  There needs to be a flag put up.  There is probably a veteran over here.”

According to the article, the prison cemetery is still owned by the State of Tennessee.

It’s my opinion that the State of Tennessee, if they are the owners of the cemetery, need to step up and do the right thing with the memorialization of those whose human remains are in this cemetery.  Regardless of what some may state as station in life, these souls deserve to be memorialized also. My take is that it is time for the State of Tennessee to make sure that this piece of hallowed public property is routinely cared for.  It’s just the right thing to do.