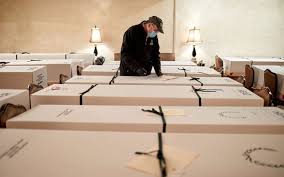 I recently read this article from author Harold Ivan Smith from Baptist News.  Smith offers a unique perspective as he attended mortuary school, is a grief educator, and works as a celebrant for Forest Lawn Mortuaries in Palm Springs, California.

Smith indicates in his article that cremation was probably about 1% of United States dispositions when he attended mortuary school in 1966, was elevated to about 27% by 2000, and in 2021 reached a 57.5% number according to the Cremation Association of North America (CANA).  Smith also points out that the rate is expected to rise to 64% by 2025 and to about 78.4% in 2040.

That percentage in 2040 would equal a raw number of just under 3 million cremations as compared to a raw number of about 1.56 cremations in the United States in 2019. . . . and the 78.4% number is not a pie in the sky thought — Great Britain is already at 78% and our close neighbor Canada is at about 74%.

So, according to Smith and Kentucky funeral director and Baptist pastor Jordan Conley, what is driving that percentage number skyward?  Here’s what I surmised from their points of view in the article:

According to Conley, more and more people are having less religious objections to cremation.  That’s in part to the fact that, of Americans over the age of 40, the percentage who feel it is very important to have religion as part of the funeral has decreased from 49.5% in 2012 to 35.4% in 2019.  And, those who are non-religious are most likely to consider cremation for family and friends.

Finally, the author also states that the American penchant for not accepting death is a possible cause of the growth.  He contends that the 6% or so of cremated remains never picked up at funeral homes is a way to deny the acceptance of death for many.

Funeral Director Daily take:  Anybody who has been in death care for any length of time understands all of these reasons.  It just is a movement that has taken hold and there will be no way of stopping it.  Those in the death care business just have to understand that they have to figure out how to profit from the changes. . . and the changes that are still evolving such as no memorial services.

I have no problem with cremation as a means of disposition.  But, what about “Remembrance and Posterity” that used to go with the death of a loved one when the human remains were put in a cemetery with a monument.  Has that pretty much gone out the window also or will online remembrances hold up in perpetuity?

I was raised in small town America and find it almost unfathomable to think about no place to go to remember my loved ones.  I find great consolation going to the graves of my father, my mother, and my brother on their birthdays, Father’s Day, Mother’s Day, Memorial Day and the like. . . and, I find great comfort in the remembrances those visits bring to me about the time in my life when I had those loved ones still in mortal form.

I also find myself contemplating why do I hold those values so dear when this generation of death care consumers don’t seem to?  While I think of that question often, I have no answer to it.

Will the idea of permanent placement and remembrance go the same way as the traditional funeral?  If permanent placement and remembrance vanishes into cyberspace, I understand that is a consumer choice, but I also feel that the world loses some humanity with that decision. . . . and if there is anything the world could use in this day and age — it is a little (or maybe a lot) more humanity.