As is probably the case in many communities across the country an article in the Dayton Daily News points out that the veterans who volunteer their time at Dayton National Cemetery are in limited supply.

The Honor Squad at the cemetery averages about 1,200 memorial tributes per year and the group has a low number of volunteers to keep it going at that rate.  According to Squad Commander Jim Groves, they have not missed a service in two years although they have had as few as two volunteers at some services. 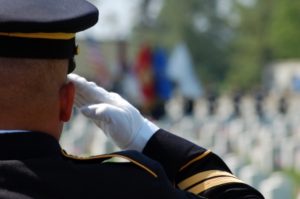 t they will take all the help that they can get.

Funeral Director Daily take:  Honoring a veteran is about as American made as it gets.  Giving honor and respect to  that person who was willing to put his life on the line for his country with service above self is a time-honored tradition.  I started in funeral service in 1980 and, in our small community, some World War I veterans were doing the honors.  I’ve worked through the veterans of World War II and Korea and am now working with Vietnam era vets.  Thanks for your service guys — on the battlefields and in the cemeteries honoring your comrades!!