Cemeteries, funeral homes looking for that perfect acquisition. . . we may have it 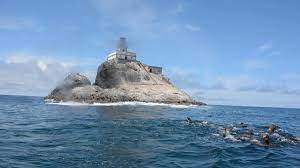 The Prudential Company has the “Rock of Gibraltar” logo as an iconic brand differentiator.  As a matter of fact the brand logo is one of the oldest and most recognizable in the world. . . . .first appearing for Prudential in 1896 when the company stated, “Prudential has the strength of Gibraltar”. . . . . According to the company’s website, the rock is an icon of “strength, stability, expertise, and innovation.”

If you are in the cemetery or funeral home business we think we may have found you the equal to promote your brand.  And, this equal is not just a logo but has been in the past a working columbarium that was shut down in 1999 for “poor record keeping and improper storage” according to this article from the New York Times.

The Tillamook Rock Lighthouse island which sits about one mile off the Oregon coast is again up for sale.  Activated as a lighthouse in 1881 it was decommissioned in 1957 and eventually sold to the present owners in 1980 to use as a columbarium.  According to the New York Times article, the present plan is to present the lighthouse again as a columbarium as an alternative to sea scattering with remains being encased in titanium urns in a bank of niches.

David Adams, a representative for Johnson Consulting Group is the seller’s representative.  According to the article Adams says this about the possibilities, “I find it intriguing some people still like the romance of scattering ashes at sea . . . . . Although romantic in many regards, it is somewhat final. There is no real place to focus on, to go back and memorialize. The lighthouse gives them a specific focal point.”

Funeral Director Daily take:  The current owner maybe had a great idea in 1980.  However, cremation rates were not what they are today and the idea of doing something “a little different” with remains was not so common either.  Maybe the time for this has come.

I’m one for permanent memorialization.  I think “Place” is very important as the final ritual in the celebration or memorialization of our loved ones.  And, just like earth burial where there is permanent place, a columbarium in a lighthouse off the shore of Oregon could also provide that permanent place for someone who loved the water.

It’s interesting how over the last 40-years the definition of “Place” as in permanent placement of remains has changed.  Many of the survivors of the U.S.S. Arizona at Pearl Harbor who died later asked for their cremated remains to be brought into the water and “Placed” with those who are already immortalized there on the sunken ship.  Or those who have purchased through Eternal Reefs where there cremated remains are brought to Sarasota, Fort Lauderdale, or Miami and implanted to help create reefs that maintain ocean life and shorelines. . . . or those who have purchased small vial spaces for cremated remains through Celestis, a space company that buys small spaces on satellites that orbit the earth.  Including their first launch in 1997, Celestis has purchased space on 17 different missions to outer space for those who have decided to spend eternity orbiting the earth.

The cost of Eternal Reefs and Celestis, according to their websites, seems to go from about $4000 to $15,000.  I don’t know how many columbarium spaces will be available at the Tillamook Rock Lighthouse island, but when you look at the amounts being spent on these other options I’m guessing that a positive financial plan is not out of the realm of possibility for the island.

So, if you are interested in this former and future columbarium just click our Johnson Consulting Group sponsor link and get in touch with Dave Adams. . . . I’m sure that he would be glad to walk you through the specifics.

The Power of Permanent Placement:  I’ve told you before how strong I feel about permanent placement and memorialization of remains.  It’s been 45 years since my father died when I was a teenager, but I’ve been so fortunate to have his burial (and my Mom’s) only a couple of minutes from my house.  Standing over their grave stones I’ve had good conversations with them and, quite frankly, told my two boys about the grandfather they never met.

Writing about Pearl Harbor above reminded me of another story of permanent placement and memorialization “making it real”.  My mother grew up and attended a small country church outside of our community.  As a funeral director I’ve always noticed that many of those small churches had recognition on the walls of the church of who served our country’s military and who died in action.

One of those from Mom’s church was Earl C. Sletto.  I’d seen the name many times and it said “deceased – Pearl Harbor”.  I’ve had the opportunity to visit Hawaii many times and on my first of many visits to the USS Arizona Memorial, reality hit me when I saw the name, “E.C. Sletto” on the Memorial Wall at the USS Arizona Memorial along with the other 1,176 Americans who perished on the Arizona that day and rest eternally at the bottom of the harbor. The permanent memorialization gave me the opportunity to reflect on this young man from this small farming community church who perished on a beautiful Sunday morning, defending our freedoms, half a world away from the world he grew up in.  That’s the power that permanent memorialization can bring to us.