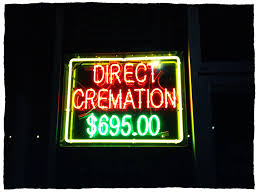 Last week we commented on an article from funeral industry veteran Doug Gober.  That article encapsulated where Mr. Gober saw the investment money going in the death care industry.  We think Gober was right on in his assessment, but one of his insights . . . . .that of “the best way to add value to an existing funeral home is to add a crematory” brought a question from one of our readers that we think is interesting.

That reader had these comments and wondered how adding more crematories would help death care services in the United States:

We think the reader has really good and correct points.  However, business in America – and the death care business is no exception – lives and thrives on Darwinian principles.  . . .that is the survival of the fittest.  And, if your establishment does not have a crematory and you are losing business to a competitor that does, you will add that crematory to your business even though the “cremation capacity” for the country is already sufficient.  Your funeral home’s addition of that crematory simply adds to the extra capacity available in the country.

The downstroke of that extra capacity brings us to the reader’s 4th point. . . .that of a “race to the bottom” on pricing.  In almost all businesses, those that have excess capacity generally resort to pricing to fill that capacity.  And, we believe, that will become a real issue as more and more crematories are built and go online for use.

Funeral Director Daily recently wrote an article entitled, “Learning from the secular “non-death care” world“.  In it, we diagnosed the QSR (Quick Service Restaurant) world and how some of the things that those franchise companies did might be comparable to the cremation/burial markets.  If you read that article, one of the things you would have learned is that Chick-fil-a franchises are very expensive and hard to get the rights to. But when you do acquire one, on average they bring in over $4 million in revenue per location.  A McDonald’s, also an expensive franchise, was a distant 2nd in revenue per location with about $2.76 million in revenue per location.

Today, we will compare that. . . and excess cremation capacity with the franchisor of sub sandwiches, Subway.  Subway’s modus operandi has been much different from Chick-fil-a or McDonalds.  Quite frankly, their apparent philosophy has been to have low cost franchise and launch costs – estimated at $140,000 – $342,000 per store compared to a McDonald’s estimated cost of $1.3 – $2.2 million per store.  The thought process has been to saturate the country with stores (much like funeral homes are doing with crematories) and then reap in sales from the apparent location convenience.

Here is where I see a correlation between the idea of too many Subways with the idea of too many crematories.  In 2008 Subway launched its “$5 Footlong” promotion.  It was wildly successful and brought in $3.8 billion in revenue to Subway franchisees in 2008 . . . that is more than the annual sales of Arby’s or Dominos at that time.

While the promotion brought in great amounts of revenue it also had the effect of lowering margins on individual franchisees as more expensive sandwiches, with greater margins were not sold.  By 2016 Subway had seen a net decline in franchisees for the first time in their history.  According to an article from “The Hustle” that I read, here’s what Subway then did:

This decision was met with uproar from franchise owners, who claimed the promo made it impossible to make a profit. The unit economics proved their case: Even the cheapest option, the turkey sub, barely broke even.”

It almost sounds like the company forced a “Race to the Bottom” with its pricing policies which is what the reader that contacted me noted in their 4th bullet point from above.  So, the question must be asked, “As we continue to build out cremation capacity in death care establishments in North America, will we also see a “Race to the Bottom” in pricing as too many providers chase too few consumers in the low-cost cremation business.

I don’t have the answer, but I think that is a great question to contemplate.