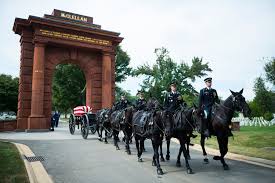 According to this article from the Washington Post, new rules are being proposed on who can be buried at Arlington National Cemetery because of space issues.  In the article, Karen Durham-Aguilera, the cemetery’s executive director states, “Our reality is that we are running out of space.  Without any changes in eligibility we will be full for first burials by the year 2041.  To be able to keep Arlington National Cemetery open and active well into the future. . .we’re going to have to make some tough decisions and restrict eligibility.”

An article on the subject from CNN which you can read here states, “Under the newly proposed rules, those eligible for interment at the cemetery will now be limited to certain groups including: U.S. service members that were killed in action, recipients of the Medal of Honor, Distinguished Service Cross, Silver Star, or Purple Heart recipients, former prisoners of war, and Presidents and Vice-Presidents of the United States.”

If these rules are passed as proposed they would end eligibility for non-combat, active duty deaths that date back to the Civil War.  The proposal would also end burial eligibility for military retirees but still allow them to be inurned above ground.

Again, according to the CNN article, “the proposed changes were the product of a two and a half year process that involved public outreach and surveys – including feedback from veterans and military service organizations.  That review was prompted by a provision passed by Congress in the 2019 National Defense Authorization Act, which the Army said directed the Secretary of the Army to establish revised eligibility criteria to keep the cemetery functional as an active burial ground well into the future.”

Recently the cemetery opened a 27-acre section capable of holding about 27,000 remains and the cemetery is planning for an additional 37-acre addition called the “Southern Expansion.”

Arlington Cemetery sits on the plantation of former Confederate General Robert E. Lee’s father-in-law.  It was vacated at the time of the Civil War and taken over by the Union Army who, by the end of the Civil War, had buried 5000 soldiers there.  Today, more than 400,000 of America’s finest are laid to rest on the property.