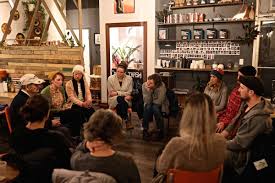 I visited Baltimore and attended the National Funeral Directors Association (NFDA) convention earlier this month.  In earlier blog posts I’ve told you some overriding impressions that I had from that experience. . . and I told you I would be bringing you, in greater detail, some of my thoughts and observations.

One of the phenomena that I see trending is what is termed as the “Death Positive” movement.  I think the Death Positive philosophy has been around for over a decade but there is no doubt that the pandemic exacerbated the thought that this earthly life is truly shorter than most of us had imagined.. . . And, that has made us think, in a positive fashion, about both what comes next and how do I make the time I have here more fulfilling.

I’ve also came to believe that if you think those are questions to ponder with one’s counselor or psychologist, I would argue that pondering those thoughts in a casual environment with friends and strangers may be even more beneficial. . . . and could lead to a positive spin on how your funeral home is seen in your local community.

One of the environments to do so is in what is termed a “Death Cafe”.  Here’s one definition that I’ve seen of a Death Cafe:

“A Death Cafe is a group directed discussion of death with no agenda, objectives or themes. It is a discussion group rather than a grief support or counselling session.”

In this article from Positive.News here’s what is said of a death cafe, “It’s very much about people feeling comfortable to bring up anything that they want to about death,” says Brigid Haines, who set up Death Cafe Cymru, along with Sarah Hillcoat-Nalletamby. Both are retired academics.

Each session is ‘hosted’ by a facilitator, but they encourage people to talk freely. “At the start we ask people to speak and to present themselves, which is a bit of an icebreaker,” says Hillcoat-Nalletamby.  The conversation kicks off from there.

Haines says she’s always surprised by the routes the discussion takes. “It’s quite random, and rather lovely in that sense,” she says. For example, in one session the group talked about pets, as someone had recently lost a pet, and that sparked a wide-ranging and serious conversation, Haines says. A lot of the discussion is people sharing personal anecdotes or information.”

Funeral Director Daily take:  I see this as a very positive movement in death care.  If funeral directors believe in ourselves and what we do we should want people sharing how we have been able to help them which is an invariable outcome for people who attend these events.  Consumers acknowledging their own mortality can lead to positive outcomes, not only for the person making that acknowledgement but for the death care profession as well.

For instance, if consumers can acknowledge that mortality they are much more apt to think about their own death decisions — decisions such as burial vs. cremation, financial liabilities, and the type of funeral that they may want.  Knowing those realities, and making plans for them, make it not only easier on the surviving family but many times on the funeral home provider as well.

If you’ve been around as long as I have, you operated a funeral home in a time when it wasn’t acceptable to be real forward towards the potential death care consumer.  However, times have changed, once we got comfortable with positively promoting preneed and using invitations to seminars to do so, our businesses generally improved.  In today’s world, there is no benefit in “sitting back and waiting”.  It’s about meeting your consumer in the mind-set that they are in. . . . . and sometimes that means spurring the discussion that leads to their eventual planning.

I’d go as far to say that if your funeral home would offer a Death Cafe in a neutral setting and provide a facilitator, possibly a funeral director who is open-minded about death care ideas, the event might become a regular monthly event.  Over time I would guess being the “Death Cafe” sponsor in your community would probably build positive brand image to your business.

I’m also guessing that your community is ready for this. . . . the question might be, are you?

Related — Here is an interesting advertisement for a Death Cafe that I saw: 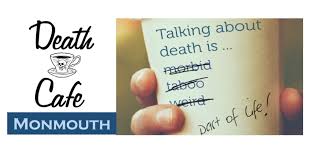 Enter your e-mail below to join the 2,976 others who receive Funeral Director Daily articles daily: