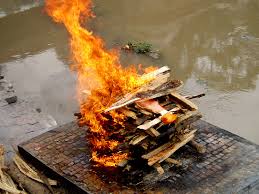 Funeral Director Daily had kept you informed about what has become known as the “Jedi bill” in the state of Missouri this spring and summer.  The bill, proposed by State Senator Jason Holsman, a Democrat from Kansas City, would have allowed for outdoor cremations and supposedly made Missouri a mecca for so-called “Viking or Jedi funerals”.

As we have told you, the bill breezed through the state’s House and Senate this year with other end-of-life issues.  However,  last week Missouri Governor Mike Parson put an end to this potential practice in that state by vetoing the bill.

Parson, in his veto message, stated, “Without more thorough vetting to ensure that outdoor cremations can be conducted in a manner that fully disposes of the entire remains while also addressing the health and safety concerns of individuals who may be impacted nearby.  I am not comfortable with allowing these types of ceremonies to be conducted in our state.”  You can read more about the veto in this article.

Senator Holsman, issued his own statement which in part said, “While I’m disappointed that the legislation was vetoed, it’s not the end of the conversation.  . . . .This has been around since the dawn of man.  This is the way that our ancestors took care of their remains. . . . (this) could end up spurring a cottage industry in the state of Missouri for people around the country who want to be laid to rest in the old way”.

Funeral Director Daily take:  So, I’m not surprised that this bill was not signed into law by the Governor.  I’m guessing that not too much concern was put into it as it moved through the House and Senate with no opposition.  However, when it got down to the actual act of signing the process into law, there was much discussion about the pros and cons of the disposition method.

America, being what it is – a land of individual freedoms – causes me to think that this type of ceremony will eventually be legalized in Missouri and maybe, many other states.  I’m not for it as an individual, however, I believe that the process’ backers will no doubt rally and bring the bill to the front again. . . this time with more statistics and data about backing up what they perceive as a  lack of public health concerns.

This method of disposition, will become what is rapidly becoming just another off-beat disposition method creating niches in the death care profession.  And, at the same time, move another case or two away from the traditional funeral director.  As a matter of fact, this practice of outdoor cremation is actually legal in the city of Crestone, Colorado.  According to our research from this article about Crestone, a city of only 6,000 people, the practice of outdoor cremation is performed multiple times per year in that locale.