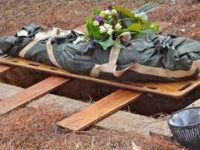 A New Hampshire community has again delayed – until at least Spring 2022 – the decision on an ordinance to allow “Green Burials” in two city owned cemeteries.  The City Manager of Lebanon City, New Hampshire, Shaun Mulholland, was quoted in this article from Valley News as saying, “This has gone on for two years now.  It really shouldn’t have gone on this long, quite frankly.” Mulholland was referring to the decision made in early December that the Lebanon City […]

Over the years that I have done the research for the articles that appear in Funeral Director Daily, among others, I have noticed two trends that are definitely growing in the death care world.  One of those trends is that of Green or Natural burials.  Virtually every day when I look for articles that will be of interest to readers I will find an article from somewhere in the United States that is opening up a funeral home or cemetery […]