Swimming against the stream 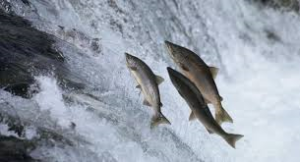 To understand me you have to understand that I was somewhat, especially when it came to business, a data geek even before data and the term “data analytics” became in vogue.  When my wife and I were married in 1988 – and I was hatching all kinds of business opportunities outside of the funeral realm, my wife once told me, “When you die, I’m going to bury you with a calculator in your hands.”

On that wave I just started thinking about the casket industry the other day.  Now, I’ve been told for a long time that cremations, as a percentage of deaths were going up, but I’ve also been told, that because of the baby boom population, the raw numbers of deaths in the United States would also be going up.

My quest was to see, as those numbers move, what is the possibility that, because of the raw numbers of deaths going up. . . that the “casket” industry could possibly grow.  Well, when I did actually put the numbers together, the future of the casket business looks pretty bleak.

Let’s start with where we are today.  As of 2020, the United States expects 8.8 per 1000 people to die in the year.  The assumption is that the United States has 331 million people at this time.  Putting those numbers together would equate to a probable death number in the country of

It is believed that we are at a 54% cremation rate today and a 46% burial rate.  That would equate to 1.57 million cremations and 1.33 million earth burials.  Assuming all earth burials used caskets the market for burial caskets would be 1.33 million in the United States in 2020.

Now, let’s move on to the year 2040 and using some predictions from the National Funeral Directors Association that you can see here.  They predict an 80% cremation rate.

So, if we then use the NFDA estimate of 80% cremations, we will see that the United States will have about 2.96 million dispositions by cremation and only 740,000 dispositions by earth burial.  That is only about half of the earth burials – even with 27% more deaths – than 20 years prior.  That statistic cannot be good for companies that manufacture and sell caskets.

As a matter of fact, you are already seeing the trends today.  Hillenbrand Industries, parent company of industry leader Batesville Casket, is a public company and have told us that their Batesville sales have been trending down.  . from $562 million in 2017, to $551 million in 2018, to $533 million in 2019.

For more knowledge on the subject I turned to Hillenbrand Industries where I discovered that their 2019 Annual Report was available on their website.  You can access it here.

From that report I read about a casket company that is the leader in their industry but are more and more putting resources into cremation options and technology solutions to continue to be relevant  to their funeral industry clientele.  As a matter of fact, here are a couple of direct quotes from that report as it pertains to Batesville Casket Company:

So, I acknowledge that this article refers to caskets for the burial type of disposition and does not take into consideration that in the future more and more people may choose a casket for a cremation service.  However, because we also see “Direct cremation with no services” as the fastest growing segment of death care options, we don’t believe that caskets that may be sold for cremation services will do much to alter the trend as we presently see it.

Finally, I think that the numbers presented in this article make it abundantly clear that, while it has happened slowly over time, the funeral – or death care – industry has changed greatly in the last three to four decades.  I think casket companies really have some challenges ahead.

However, if you are a funeral home operator. . . you have to realize that caskets are sold only ancillary to the services that you are providing your client families.  My tip is to focus on that “service” element and you will continue to serve families long into the future.