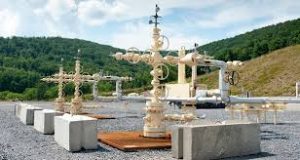 Last week the trial of Karen Neff, a caretaker with her husband Keith Dwayne Baratie, Sr, of the Belmont Memorial Park Cemetery in Belmont County, Ohio, began.  Neff’s husband, and co-defendent, will have a separate trial beginning on February 7.  The couple is charged with forgery, aggravated theft and securing by deception.  According to the article from the Times Leader online of Martin’s Ferry, Ohio that you can read here, they are alleged to have stolen almost $300,000.

From my point of view this is an interesting case for a couple of reasons.  The couple effectively ran and/or operated the Belmont Memorial Park Association for many years without supervision because the board uneventfully dissolved simply for lack of membership.  According to charges, they pretended to be the president and secretary of the Belmont County Memorial Park Association when they were not.  The prosecutor continued to say that the couple used the funds of the cemetery as if they were their own.

The prosecutor also pointed out that on October 17, 2013, everything changed simply because of the amount of cemetery funds available.  On that day, it is alleged, that Neff and Baratie, Sr. agreed to an oil and gas rights lease for the cemetery property which paid the cemetery an upfront total of $282,000 for those rights.  It is further alleged that the defendants used that money for their personal expenses.

Funeral Director Daily take:  This will be an interesting case to follow with a “Who’s watching the store?” type of intrigue.  It appears that for years the couple kept the cemetery operating for those that needed it . . . . even with no formal board authority.

My community has a few association cemeteries.  Each has its own board, but from my point of view, there is not a lot of oversight on what is going on with the assets of the cemeteries.  If the funeral directors can get a grave dug and the lawn gets mowed, nobody thinks twice about the cemetery and the assets it may possess.

I’m guessing not too many cemeteries have been constructed on what might be oil and mineral land, however, I know in my community the cemeteries may have a couple of hundred thousand dollars in their perpetual care accounts.

I hate to keep pointing this out, but as America has positioned from a rural nation to an urban nation and from an earth burial society to a cremation society, cemeteries are being neglected.  I think it is a growing problem that is not always an easy problem to solve.

Editor’s Note:  While I love living in Minnesota, it is always nice to get out to where the temperature is warmer for a couple of weeks during the midwinter of January/February.  Funeral Director Daily will not be published on a regular basis for the next two weeks while Angie and I enjoy the sunshine in a warm weather climate.  We will, however, throw some articles out there just to keep you looking in your inbox.  By the way, Thanks for reading!!