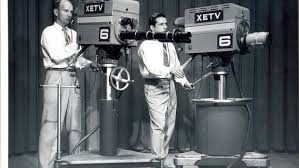 As we head into the week before the Christmas Holiday I reprise my role as a guest of hosts Jeff Harbeson and Ryan Thogmartin on their Funeral Nation program. . . this time Episode #210.  The hosts have me back quarterly to discuss death care companies in the public stock markets. . . where I think those companies have been and where I think they are going.  It’s always a fun discussion and you never know, maybe we will eventually say something that turns out to be true!!

Here’s how they introduce the show and if you click on the link you can watch it yourself. . . .“Tom is back for his quarterly report on the state of the funeral profession. His deep dives into the numbers help us predict where we’re heading and what we need to do about it. The FN analyst isn’t a crystal ball- but he’s the closest thing we got. We’re bringing all of this and more to you on the week on Funeral Nation!”

As I sum up what happened in the death care public company realm for the July thru September quarter of 2020, I would say that all companies in the business did well with the portion of the business that was in death care.  All of the funeral home and cemetery operating companies in North America– Service Corporation International, Carriage Services, Park Lawn Corporation, and StoneMor — reported excellent sales and earnings.  The common denominator was probably COVID induced with a higher number of deaths and service revenue per case still depressed, but moving upward, more toward normal.

The Batesville Casket division of Hillenbrand Industries and the Memorialization segment of Matthews International were division leaders for their respective parent companies.  And, we bring you news from Assurant and Security National Financial Corporation in the Funeral Nation segment also.

An interesting take on stocks — I’m writing this article on Thursday morning and like many December mornings in Minnesota, I chose to do my workout indoors on the treadmill.  In doing so I watched Jim Cramer of CNBC explaining the markets.  Today, he had an interesting take on how stocks have been picked and purchased and how that has changed over the past 30 years.

His theory was that we are now into “retail” buying meaning that individuals can use platforms to buy stocks on their own without using brokers.  That has led, he argued, into picking stocks that are known to consumers compared to picking stocks on what a broker might suggest because of the positive fundamentals of the individual stock.

That makes sense to me because I remember my dad who has been deceased for 43 years now always saying he would never buy a stock that had a price to earnings ratio of over 15.  That was drilled into me as I still always look at the PE ratio of a stock when I buy it.  However, I would have missed a lot of good opportunities if I had stuck to that criteria over the past 30 years.

So far, those investors have been rewarded in 2020.  The stock opened on January 1 at $29 per share and when I checked yesterday it was selling at $99 per share.  So, investors for the year 2020 have had their money multiply by 3.4 times to this point.

It made me wonder about death care company stocks.  Death care companies are not household names. . . .Batesville and Aurora are not well known consumer brands, even though all funeral directors know of them.  And, the funeral home operating companies locally brand to play off those long historical relationships their member firms have going for them . . . so the parent companies are not known consumer brands either.

It made me wonder about what is coming in the death care space.  And, I think that is a national consumer brand of direct cremation.  We’ve written about the companies working toward that end and believe that there are several out there trying to build that national brand.

At this point, I’m of the opinion that process will take the road much like the cellular phone companies traveled.  Back in the 1990’s there were hundreds of cellular phone companies.  They continued to acquire each other until we have really three in America today — Verizon, T Mobile, and At & T.  I think that is exactly what will happen in the national direct cremation race and the surviving company(ies) will be well known as consumer brands and can likely raise funds through a public offering.

Anyway. . . . interesting thoughts for the future.

Final Thoughts — One of the electronic publications I read regularly is called “The Hustle“.  It’s a free (kind of like Funeral Director Daily. . . you get what you pay for) daily e-mail concentrated on business and financial aspects.  In today’s issue they published the 10 highest spenders of advertising dollars in the United States for 2020.  I thought you might enjoy seeing it and then believing that spending promotion dollars has its returns.

For Amazon, it was pointed out, that as big as they are, that spend is over 4% of their annual sales.  What percentage of your funeral home annual sales do you spend on keeping your name in the public? 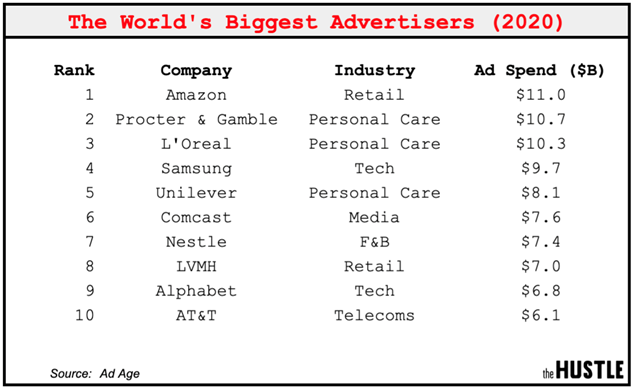 Have a Great Weekend!!!

Enter your e-mail below to join the 1,852 others who receive Funeral Director Daily articles daily: