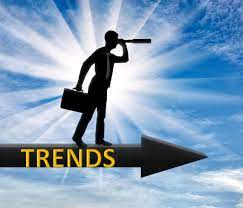 New products and services used by the American public seem to start as fads, become a trend, and then, those with staying power evolve into a tradition of life.   Over the last few days I’ve noticed a couple of products that have either followed that road map or may be on their way to dissolving.  And, I think that there is something for death care professionals to learn from the process.

On one hand let’s look at Peleton, the stationary exercise bike company that uses technology to let one compete against others while “riding their own bike” in the comfort of their living rooms.  Sales of Peleton bikes and their technology services soared during the pandemic and this fad, became a trend, and looked like it was on its way to becoming a traditional way of exercise for millions of Americans.

Then, however, sales hit the brakes.  What happened? . . . . circumstances changed when we started to come out of the pandemic.  Money that was withheld by consumers because of not dining out or going to entertainment started to be spent again. . . in many cases making it less likely for one to buy a Peleton.  In addition, the idea of going to the office and working out in a facility with others around picked up also reducing reasons for people buying a Peleton.  Today, a Peleton in a home or apartment is not a tradition and one might wonder if it is still a trend of the American consumer.

Another thing I’ve noticed is how we watch the “content” of our television is changing.  The tradition of “cable TV” is being beat down by the new trend of “streaming” which I would conclude is fast becoming a tradition for many viewers.  This recent press release will tell you that Streaming now accounts for 33.7% of all watching, Cable for 35.1%, and Broadcast TV 22.1%.  Those numbers indicate that while cable still is in the lead, streaming has grown 23.6% Year of Year and Cable has declined 11.9% in the same time period. . . . making the case that streaming has graduated from “trend” and is becoming the new traditional method of watching TV content.

And, I think the growing trends in what are termed “alternative” services at this time include natural organic reduction(NOR), alkaline hydrolysis, and green burials.  As a matter of fact, this report indicates that the “Green Burial Trend” will grow from revenue of $517 million in the United States in 2021 to about 1.21 billion by 2030.  That’s a 134% increase or an average increase of almost 15% per year.

For those that produce “content” for the television world, such as sporting events, they need to look to the new trends to make sure viewers can watch them while continuing to hold on to what business they have in the declining world — in this case broadcast and cable.  That means not only getting the content on the old traditional methods such as cable, but on streaming services as well.  Look no further than Disney/ABC on how they do this. . . . making sure that their sporting events not only are on ESPN, but on ESPN+, the streaming platform or how Disney shows are not only in theatres but on Disney+ as well for streamers.

Unlike Peleton, I’m of the opinion that streaming and “alternative” dispositions and memorializations will become more than a trend and will become a tradition.  The question is, as a funeral home owner, what do you do about that?

I think it starts with carrying the right products and understanding that “alternative” products may be as important to your business going forward as casketed burials and flame cremations are today.  Do you understand how to serve that client family that comes in for a “Green Burial”?  Do you have access to alkaline hydrolysis and price-points for it when a family comes in and asks for it?  For families that choose less permanent memorialization for their loved ones forgoing such options as earth burial, columbariums or burial of cremated remains. . . do you have the knowledge of how to get Memory Glass, or Eterneva, or solidified remains?

I think funeral homes will be just fine if they realize that they are the “experts” in “Death Care”. . . .not caskets, not cremations, not Green Funerals. . . but an all-encompassing Death Care and make sure that their communities know that they are the best at handling whatever disposition situation a family may prefer.  It’s not much different than a “content company” making sure that viewers can watch their content on whatever medium – streaming, cable, or broadcast — that their client prefers.

In essence, make sure you are expanding your thought horizons so as not to limit or restrict your business in the future.

Spotting a Trend:  If you can spot and identify a trend before the competition does it can be great for your business.  Just like those we refer to in the above article that saw cremation becoming a trend and then a tradition and got in the business in a big way early have profited by their foresight.

I read an article this weekend about a restaurant chain that uses a unique set of variables to find out, before census numbers come out, what areas are growing.  They want to put restaurants where the population is growing. . .not where it is declining.

It was very interesting to me that one of the variables that they use is the “One-way” price of U-Haul rentals.  As you may be aware of since the pandemic was rolling, many people have left Illinois.  And, it is also in the news that Florida is one place that people are going to.

Take a look at the one-way costs for a U-Haul rental from those locales:

From Chicago to Orlando, Florida a quote for a one-way U-Haul rental is currently $2,426.  Going the other way from Orlando to Chicago the cost is only $712.  Same route.  Same distance.  The cost difference represents great demand on the Chicago to Orlando route and very little demand on the Orlando to Chicago route.  I’m guessing, using those numbers, the company specified will be looking to put restaurants in the Orlando market and not make the investment in Chicago market.