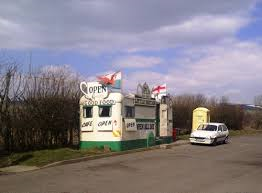 The idea of a “Death Cafe” is somewhat new according to this article from Pennsylvania.  It’s not what you might think and this one was started by funeral director Carolyn Fletcher about three years ago in the Pittsburgh area.  According to the article the concept started in 2011 in England and there are now regularly scheduled Death Cafes in about 60 countries.

Death Cafes can be held in funeral homes but don’t have to be and what they do is to help people talk to others about all things death related.  According to Fletcher, “It isn’t therapy. it is more philosophical.  The number one rule at Death Cafe is that there is no agenda.”

The Death Cafe that is held in Pittsburgh once a month allows attendees to openly discuss all kinds of topics over snacks and coffee.  Conversation can range from out-of body experiences to discussion about different kinds of burial options people may be thinking about.  It is not, from a business point of view,  like a pre-need seminar where sales is the eventual goal.

One Pittsburgh resident who attends mentioned that it is nice to be able to talk about some of these issues and get answers.  She continued that she learns about things that she didn’t even know existed.

Funeral Director Daily take:  While a Death Cafe is not like a pre-need seminar because it does not eventually ask for a direct sale, it can be a market share builder for your funeral home.  Just by opening your funeral home at night once a month for this type of event could quite possibly build market share over time.

In my 33 years of direct funeral service work I was many times amazed that when I met someone and mentioned I was a funeral director.  So many times they lit up and said something like, “Oh, I’ve always been fascinated about your work and I have a question for you.”  It’s my opinion that a Death Cafe will bring those types of people into the funeral home to get their questions asked and answered.  If you can make a friend with them, then you probably have won a client family for the future.

I’m pretty certain that if I was running a funeral operation, this is something that I would give a try in my community.