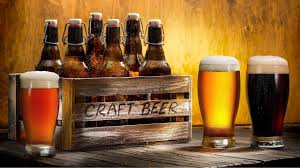 I read this article entitled “Everyone dies, so why not go out as a tree?” from Denverite magazine.  I even smile as I write this but it made me think of craft beer.

I’m not alcohol free.  I had of my share of beer. . . especially in my twenties.  Today, however, I’m more for sipping a glass of a nice cabernet or merlot than any beer.  However, as I read the article which is about alkaline hydrolysis, sometimes referred to as water cremation, as a form of final disposition I found myself comparing the growth of craft beer sales with what could be the growth of “environmentally friendly” disposition services in the death care profession.

I first learned of craft beer in the mid-1990’s.  I was involved with a business that had me traveling to Hawaii every December for about a ten day stay.  A short walk from our hotel in Kona was a pizza and pasta house known as the Kona Brewing Company.  We went for the pizza and pasta but discovered that they brewed their own beer on premises.  I point this out because it has been a full 25 years since I first heard of “craft beer”.  However, in 25 years, craft beer has grown greatly and is everywhere.  Today, I can find Kona Brewing Company brands in my local grocery store in Minnesota.

Craft brewing success didn’t happen overnight.  And, it didn’t happen without the industry talking it up and leading with their advertising and perceptions about the wonder of craft beer as opposed to the big bottlers like Anheuser Busch and its Budweiser brand and Miller Brewing.

When you read the article from Denverite, you will notice the purveyors of alkaline hydrolysis really talk up the “environmentally friendly” impact of the disposition as compared to that of flame cremation (366 million metric tons of carbon released in the U.S. atmosphere according to the article) and the burial of embalmed bodies (casket, concrete vault, and embalming chemicals in the ground).  And, “. . .water cremation as the most environmentally-friendly option out there according to UCLA.  It emits no toxins from the body”.

Here is another pitch from the article, “We expect to have environmentally friendly alternatives in every area of our life, every big purchase that we make.”  “Whether it’s a car or an appliance, that’s just an expectation we have now. So why wouldn’t we have the same expectation when it comes to our death care options?”

They also point out that the web-site for Service Corporation International states, “it contributes to water reclamation efforts and is replacing its fleet with cleaner cars.”  My guess is that they mention that because if you are an environmentalist, it just doesn’t seem like it takes a pro-environmental stand very far.

Why have I brought these quotes up?  I do so because “perception matters”.  And, it is my opinion that the green death care movement will, over time, pick up share of the death care market.  Anheuser Busch is still doing great business while Miller Brewing has been purchased by Molson Coors, but craft beer has cut into their profit margins.

Craft beer sales increased 4% in 2019 while beer consumption, as a whole, dropped 2%.  Today, and it is 25 years since I first heard of craft beer, but the craft beer market in the United States totaled $29.3 billion in sales in 2019 of a total beer sales market of $116 billion. . . that a better than 25% market share.  And, craft beers have a 57% market share with Millennial weekly beer drinkers.

Defending your market share against the green movement is important.  You have to either fight the environmental claims that are sure to increase or, probably a better option, is to join the movement in your funeral home by considering a move into the alkaline hydrolysis business.

Again, just my thoughts, but I do see the commonalities in these two product trends.