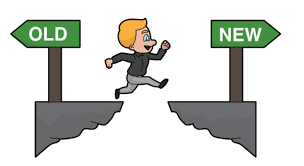 I recently came across a couple of surveys of of American workers and their career satisfaction and thoughts of career changes.  One thing is certain. . .we are not in the 1960’s when young people were told to “get a good job, hold on to it, and retire with a pension”.

We now know that individuals who follow that course of action will be few compared to those that probably work in multiple occupations during the course of their careers.  Some career changes will be mandated by our quickly changing technology and duties that need to be done as well as some jobs that seem necessary today, but may be obsolete in a dozen years of so.

Two things become really apparent in occupations going forward.  First, job change will occur and it will occur in several capacities — for instance some people may want to change jobs for an increase in pay and some people will take pay reductions in trade of less stress and more flexibility.  There will be all kinds of reasons for job change. . . some we can’t even think of, but that change will be appropriate in somebody else’s life.  Secondly, there will be a large growth in full-time temporary workers.  Full-time temporary workers sounds like an oxymoron, but in reality many people will move from one temporary job they might hold for two years to another temporary job or from one employer to another employer in the same type of work capacity.  The survey I read said that this will be especially noticeable in logistics, warehousing, and transportation positions.

I think in funeral service, because of our licensing requirements, we could be especially vulnerable to a lack of employees moving forward simply for the fact that it is difficult for people, who may have the right tools for our profession, to move into it without earning some type of embalmers or funeral director’s license.  I’m not necessarily advocating for relaxing requirements, however, we do have to understand that the licensing aspect is a roadblock to many who might try our profession.

I come to this thought process when I think of someone who may be a financial executive or technology worker who does not get personal satisfaction from that position and would like to help people through the funeral process.  They may be willing to take a lesser salary, but the roadblock comes in going back to school for a year or so to qualify for that mortician’s license.

To get a teaching license or nursing license the education system has several pathways available that allow employment changes without too much disruption prior to getting that license.  Funeral service needs to make sure that we can be flexible for 2nd and 3rd career workers also.

Another issue that I’ve seen has grown out of the pandemic.  That is the issue of how do we interest people in the funeral profession if they cannot see what the funeral professionals are doing.  There is no question that funeral directors are doing an incredible job during the pandemic, but because of social distancing rules, much of what we are doing is outside the public view.  Although, I would argue that the print media has given the profession more publicity than ever before.

The fact does remain, however, that so many were led to our profession by watching and admiring an existing funeral director in action.  During the pandemic, it could be argued that the funeral director’s job is being done more and more in private.  That would tend to lead one to believe that exposure to what we do is muted and could have a negative effect on the potential numbers of future employees.

Trends and statistics tell us a couple of things going forward.  We will have more deaths as our nation ages and grows in numbers.  That fact is pretty certain just by studying the demographics of age and death.  Secondly, the trends continue to tell us that we will have more cremations and less embalmings.  We need to make sure that potential employment licenses are available for all the job categories and maybe all positions don’t have to have such an overriding license such as one might have with a funeral director, embalmer, or mortician licenses.  Will employment be possible in our profession with a “Removal License” or a “Cremationist License”?

Those are questions that are germane to employers, employees, and health departments as we move forward.

Funeral service is a noble profession.  The more we can do to bring more qualified people into the profession in some way the better as an industry we will be.