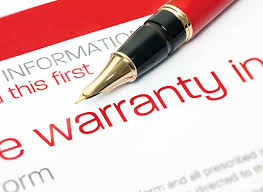 During my high school summers I worked for a furniture store delivering furniture.  One of the things that I came to realize during that time was the concept of warranties and just how much it mattered in that business.

The owner of the furniture store and the sales reps sold furniture not only with the factory warranty but also with their personal warranty that they would “stand behind the product”.  There were products that were defective and the store and manufacturers were happy to replace that merchandise.

But, I also learned that there were consumers that thought the product they purchased would last forever.  I can remember the cases of a recliner that was ten years old and had been used by a 350 pound individual every day and that individual wondered why it was wearing out.  Those types of customers would come into the store and want justice. . .or at least a new recliner at a bargain price because of this.  The owner and sales reps were always put into a defensive position about having to tell the consumer that, quite frankly, that recliner had exceeded its useful life and it would be difficult to give any type of credit for the reason the consumer was citing.

It’s interesting how many times in my 35 year career as a funeral director that I thought of those times working at the furniture store.  I thought of it in the context of owning and operating a funeral home not everything went perfect, but in the duty of that business, almost all purchases of services and goods had a finite ending.

In our business, as hard as we tried, not everything was always perfect.  Maybe a family thought the deceased’s hair was parted the wrong way.  Maybe there was a typo in the memorial folders or the flowers for the visitation were not arranged the way the family thought was best.  However, in the funeral business, you are able to solve those issues prior to the casket being interred in a cemetery or a cremation being performed and the urn given to the family or interred in a cemetery or niche.

My point being, that at the conclusion of your service your client families were generally happy with the services you provided, and over time, there was nothing, in your business transaction,  like that recliner being used everyday and wearing out to give them some angst at a later date.  I can remember many times at the cemetery watching a casket being lowered into the grave and thinking “I’m glad we rectified the issues that this family had and now the services are over and they are very happy.”  That was always a great relief to me.

So, what made me think of this today?  Well, just today I received three articles on cemeteries and the problems that have occurred long after the interments of client family members.  I was never in the cemetery business – although I served on the board of a small association cemetery in my hometown – and it is very apparent that they are like the furniture dealer and have problems that may surface long after their initial services have been completed.

Cemeteries are at the whim of nature many times and some of these problems cannot be helped.  However, cemeteries as businesses, have made promises to the consumer, and are responsible for the promises they make.  It is my opinion, that if backhoes make a mess in the opening of a grave in inclement weather, then that mess has to be taken care of as most cemeteries promise “upkeep”.

And, I’m well aware that as funeral homes have lost revenue with the popularity of cremation, so have cemeteries — and probably to a greater scale.  Think of it, with earth burial every death required a grave space, and opening of the grave charge, and in many cases a monument.  With cremation, many of those that choose that option do not memorialize with a grave so there is no grave space sold, no opening/closing charge, and no monument purchased.

While I was always glad that the funeral service had a finite end, I am well aware of my cemetery brethren and the issues that they are dealing with and have empathy for them.  However, like that recliner, if you promise a set of circumstances to the consumer, you have to keep those promises.

Here is an article on cold weather and ground freezing causing monument problems.

Here is an article and news video on “client outrage” because of their perception of cemetery conditions being unacceptable.